Hope's Edge The Next Diet for a Small Planet

By Anna Lappe, Frances Lappe
An inspiring vision of what can be done to foster ecological sanity and community development.

In her 1971 three-million-copy bestseller Diet for a Small Planet, Frances Moore Lappé blew apart the myth of food scarcity in the world. She also helped people see the value of a plant-centered whole foods diet. In the year 2000, the author and her daughter Anna went on a pilgrimage to five continents in search of courageous individuals and groups who are working at "hope's edge" to heal our threatened planet.

The Lappés set before us five "thought-traps" that serve as the foundations for hunger, poverty, and environmental catastrophes: (1) the enemy is scarcity; production is our savior; (2) we are all selfish and the only thing that counts is the survival of the fittest; (3) since humans are nothing more than self-seeking, let the market decide, along with the experts; (4) the best way to solve all global problems is to divide them up one by one and then tackle each one separately, and (5) global corporate capitalism has triumphed and everyone stands to benefit from this system.

The Lappés find alternatives to these thought-traps in Brazil where landless peasants are taking on big landowners, in Bangladesh where peasant women are using micro-credit to restore their sense of self-esteem and independence, in Kenya where poor villages are creating their own tree nurseries, in India where farmers are directing their own seed research, and in Wisconsin where farmers are using cooperatives effectively.

These inspiring examples of community development and ecological sanity face formidable opposition in the form of multinational corporations that control most transgenic seeds planted worldwide, large-scale farms relying upon massive doses of pesticides and chemical fertilizers, the sixty-fold growth of the U.S. beef industry in the last three decades, and the erosion of one-third of farmable land in the past forty years.

In addition to carefully and persuasively setting out their vision of what must be done to save our small planet, the Lappés provide a delightful collection of recipes from around the world by whole foods and vegetarian chefs. 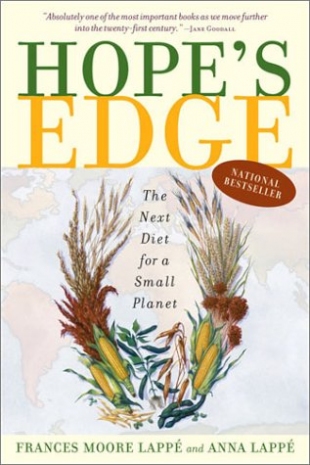