By Winifred Gallagher
A watershed work on the way gifted, energetic, and inspiring individuals around the world are making a difference in the affairs of the planet thanks to their spiritual practices.

In our culture of celebrities, we hear far too little about spiritual heroes — individuals of all faiths whose charisma, enthusiasm, and love of others result in selfless acts of service. In Working on God (1999), Winifred Gallagher recounted her three-year journey exploring Buddhism, Judaism, Christianity, and the New Age. She brings the same richness, breadth, and soulful depth to this volume on spiritual genius, which she defines as "the unique human instinct to pursue life's meaning."

The visionary leaders covered here are characterized by "the capacity for transcendent experience, altruism, and social skill." Gallagher, a self-confessed agnostic, is impressed by their special combination of holiness, goodness, and charisma. Many of them blend mysticism and social activism. Quite a few are mavericks within their own tradition, blazing new trails in religious thought and activity.

Brother James Kimpton is a Christian who has worked in India for 40 years serving the poor in countless village-level programs where the aim is self-empowerment rather than charity. Gallagher sees him as an exemplar of "heroic virtue."

The author's profile of Jewish teacher Lawrence Kushner is very well done, catching him at work in the synagogue, teaching rabbinical students, and dispersing wisdom in counseling sessions. "God is in everything!" is Kushner's mantra, and it reflects his very earthy spirituality.

Gallagher's chapter on Mata Amritanandamayi Karunamayi, India's "hugging saint," is a gem. For the past 25 years, for 5 to 15 hours a day, she has embraced individuals— 20 million in all — in order to help them sense the unconditional love of God. She "manifests divinity" and transmits peace to people from around the world.

Also covered are interpreter Huston Smith, an academic lifer who has pioneered a personal involvement with all of the world's religions; activist Riffat Hassan, a Muslim activist and scholar whose feminist perspective is revolutionary; preacher Tony Campolo, an Evangelical Christian preacher and sociology teacher who employs humor in his ministry of working for justice; Govindappa Venkataswamy, a Hindu doctor in India who has performed 100,000 surgeries to remove cataracts; intellectual Adin Steinsaltz, an Orthodox scholar whose lifelong project is translating the Talmud and making it accessible to lay persons; four nuns in the Association of Contemplative Sisters who are blazing new paths in this tradition; and Tenzin Palmo, a Englishwoman and Tibetan Buddhist nun, who did a 12-year solitary retreat in a Himalayan cave.

Spiritual Genius is a watershed work on the way gifted, energetic, and inspiring individuals around the world are making a difference in the affairs of the planet thanks to their spiritual practices. 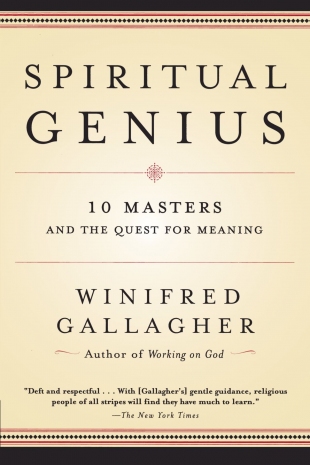