Dreaming Me From Baptist to Buddhist, One Woman's Spiritual Journey

By Jan Willis
An inspiring memoir about the spiritual practices of you and transformation. Wisdom

Jan Willis is the first African American to become an Indo-Tibetan scholar and translator. She is a professor of religion at Wesleyan University and has been teaching Buddhism for over 25 years. In this inspiring memoir that covers more than 50 years in her life, Willis focuses on her quest: "To get beyond the pervasive sense of pain and suffering I carried, I knew I would have to find healing, to find that place of belonging that is so basic for us all: feeling at home in our own skins. And so, from my earliest days, my solitary quest became to find a way to accept myself, and to love me."

The author grew up in Docena, Alabama, where the Ku Klux Klan was active. As a teenager, she witnessed a cross-burning in front of her house. One of her most vivid accounts is being baptized as a girl in the Baptist tradition, where she felt a true sense of community. Willis marched with Dr. Martin Luther King, Jr. and felt she was on her way — standing up for what was important to her. She was accepted at Cornell University in 1965 as one of only eight African American students.

After studying abroad in India during her junior year, Willis returned to Cornell and was part of the Black Student Alliance's armed takeover of the campus's student union building. But instead of getting involved in the Black Panther Party, Willis returned to Nepal to study Tibetan Buddhism under Lama Yeshe. This teacher worked with the author for 15 years on her chief problem — "holding too rigidly to the self." Willis learns how to be gentle with her flaws of arrogance and the flip side of low self-esteem. Patience, clarity, and the Buddhist practice enable her to come to self-acceptance.

In the Tibetan tradition, Willis writes: "Being a teacher is superior because one can help beings to understand ways of benefiting themselves both now and in the future. As can be imagined, it considers the teaching of Buddhism as the best of professions." This fine memoir will enrich the lives of all who read it with its incisive insights into the spiritual path of transformation. 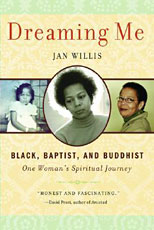