By Barbara Kingsolver
A searing collection of 23 essays that opens our hearts and minds to uncomfortable truths about the American way of life.

There is no end to the marvels that can awaken our wonder, from the majesty of the night sky, to the smell of lilacs in spring, to the tenderness in the faces of those we love. But we can also be astonished and even awestruck by the words and the writings of contemporary prophets who open our eyes and our hearts to hard truths about ourselves and our nation.

As Americans and New Yorkers, the one writer we wanted to read after the terrorist attacks on September 11 was Barbara Kingsolver. The bestselling author of The Poisonwood Bible, Prodigal Summer, Animal Dreams, and other works of fiction, she has amply demonstrated her extraordinary skills as a novelist. But we have always also been swept away by her talents as an essayist. Her previous collection, High Tide in Tucson demonstrated Kingsolver's "wonderosity" (a term coined by Sam Keen by which he means the fountain of wonder and curiosity inside us all).

The 23 essays in this sterling collection tug at the heart and soul with their searing truths about the American way of life, the meaning of patriotism, the culture's acceptance of violence as a way to solve problems, the inherent global dangers of conspicuous consumption and the ravaging of the earth. Instead of just voicing the complex and deeply troubling spiritual issues behind America's response to the terrorist attacks, Kingsolver plunges into the terrible wound. She dedicates Small Wonder to "every citizen of my country who has suffered bereavement with honor, trepidation without panic, and the insult of fundamentalist condemnation without succumbing to similar thinking in turn. We may yet show the world we are worth our salt."

Kingsolver begins with an inspiring parable about a bear in Iran that saved and nursed a human infant. She sees this wonder-inducing incident as a sign of hope in "a world where wells of kindness seemed everywhere to be running dry." The things we dread most, she concludes, can sometimes save us. This spiritual truth gives way to her courageous presupposition that instead of returning the blows to the terrorist networks around the globe we need to look at other serious dangers we face: "A careless way of sauntering across the earth and breaking open its treasures, a terrible dependency on sucking out the world's best juices for ourselves — these may also be enemies."

Kingsolver admits that she belongs to the 20 percent of the world's population that uses 67 percent of the planet's resources and generates 75 percent of its pollution and waste. U.S. citizens, who comprise less than 5 percent of the global population, use 25 percent of its fuel. An average American consumes good that would support 30 people in India. These scary statistics flesh out the growing gap between the rich and the poor and paint a clear picture of how the good Earth is being savaged to satisfy the appetites of consumers and the corporations that feed them.

While pondering the small pleasures of her homes in Tucson and Virginia, Kingsolver refuses to ignore the plight of the homeless. While writing about her daughter's chickens, she challenges us to give more support to our local food economies (the average piece of food on an American dinner table traveled 1300 miles to get there). And while recalling the tragic shooting deaths at Columbine High School, Kingsolver condemns the culture's advocacy of violence: "Children model the behavior of adults, on whatever scale is available to them. Ours are growing up in a nation whose most important, influential men — from presidents to the coolest film characters — solve problems by killing people. Killing is quick and sure and altogether manly. It is utterly predictable that some boys who are desperate for admiration and influence will reach for guns and bombs."

The author speaks for all of us who cherish peace when she laments the fact that her tax dollars have helped finance attacks on Afghanistan, Chile, El Salvador, Grenada, Iran, Iraq, Libya, Lebanon, Nicaragua, Panama, the Sudan, Vietnam, and Yugoslavia. Kingsolver's patriotism has nothing to do with guns, bombs, oil, or corporate growth: "I'd like to stake my pride on a nation that consistently inspires rather than bullies, that brings unconditional generosity to the table, and that dispenses justice over the inevitable bad deal with diplomacy and humor rather than with more bad deals. If this were the humane face we showed the world and the model we brought to working with it, every time, I believe our children might eventually be able to manage with a military budget the size of Iceland's."

Now that's what we call singing a loud and robust anthem of praise to the highest ideals of the Republic. Letting freedom ring has nothing to do with bigger weapons or better cars or higher returns on our stock market investments. It has to do with thanking God for all the abounding wonders of life and working persistently for the peace, justice, and well being of all — including the Earth. Kingsolver helps us see this possibility. That is what makes this book a work of wonder. 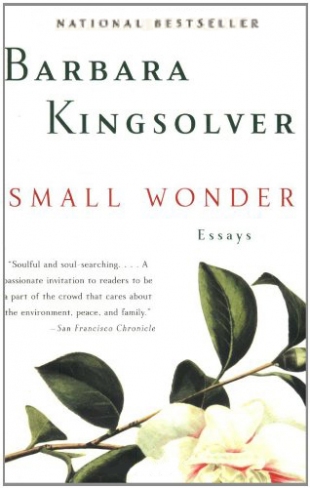