By Bernie Glassman
An inspiring and revolutionary interpretation of prajna wisdom as a compassionate and fulfilling way of being in the world.

We are living in a time when dueling dualisms and ancient separations are causing untold pain and suffering all over the world. Many religious and political leaders continue to point to the "other" as evil, the alien, the enemy. In this timely and spiritually wise book, Bernie Glassman, cofounder of the Zen Peacemaker Order and author of Bearing Witness: A Zen Master's Lessons in Making Peace, notes: "As I've become more and more involved in social action, I see the issue of oneness and diversity not only as a primary issue in Zen practice, but perhaps as the issue in the peacemaking world. I see this in the many places around the globe where systematic massacres and widespread ethnic cleansing are predicated on the notion that there is only one way to be, one way to behave, one God to believe in, and that all else is somehow invalid. There are always some things we exclude from the One, that we can't possibly believe are enlightened as they are, that we can't believe are it. This points to the importance of prajna wisdom, to not seeing things in a dualistic, inside/outside way but rather experiencing the vibrancy of everything as it is, this very moment.

Infinite Circle consists of three workshops given by Glassman as the Abbot of the Zen Community of New York on two classic Buddhist texts and on the Bodhisattya Precepts. He is a very profound and skilled teacher who manages to illuminate some very difficult Zen subjects, including emptiness, letting go, the identify of relative and absolute, and nonkilling.

In his discussion of oneness and diversity, Glassman sees us all within the "One Body." Yet each of us is represented by manifold differences and uniqueness. This circle is all-inclusive. When I try to lesson the chaos in my life, the chaos of all others is diminished as well. When I empathize with the suffering of my neighbor, the walls between us vanish and we are one with each other and the pain. When I take a bath, I am immersed in the water, the tub, the air, the room, the house, the city, the state, the country, the universe.

It is only my fixed ideas or notions about people and things that breaks everything down into this or that, good or bad, pure or impure. Glassman calls these attempts to pin reality down "snapshots." They can also be seen as mind-games, the egotistical self's vain attempt to control what is happening.

One of the most helpful practices in Zen training is "bearing witness" where we just take note of what is unspooling before us. Glassman explicates this process of "not knowing" which makes it possible for everything and anything to manifest. Being open to what is enables us to take loving action in the world.

Glassman never says this is easy. To illustrate just how difficult it can be, he shares the following anecdote: "A Chinese poet once asked a Zen teacher, 'What is the most important thing in Buddhism?' The teacher replied, "Cease from evil and please do good!' The poet said, "Even a three-year-old child can repeat those words.' The teacher replied, 'Yes, even a three-year-old child can repeat those words; but an eighty-year-old person still finds it hard to do what they say.' " So set aside your intellectual snapshots, revel in the One Body, and practice peace. 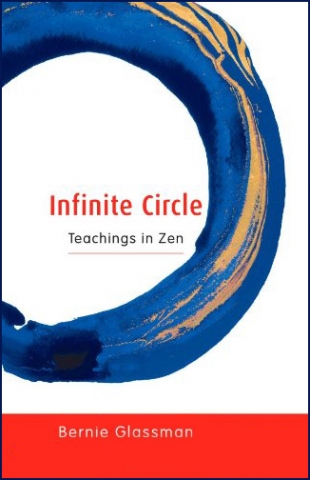