By Shunryu Suzuki
A classic on the spiritual practices of openness, nonduality, emptiness, and enlightenment.

Shunryu Suzuki (1905 - 1971) was born the son of a Japanese Zen Buddhist priest. He become a monk at age 13 and arrived in California in 1959 where he founded the San Francisco Zen Center. He was a direct spiritual descendent of the great thirteenth century Zen master Dogen.

One of the things that interested Suzuki was that many Americans had a beginner's mind in relationship to Zen. They were ready for anything and open to everything. This volume of lectures given by this Zen master is divided into three sections roughly corresponding to body, feeling, and mind — Right Practice, Right Attitude, and Right Understanding. The book contains many insights into zazen (sitting meditation) practice — body postures, breathing, and focused attention. But Suzuki goes way beyond that to embrace a Zen attitude toward all things: "To have some deep feeling about Buddhism is not the point; we just do what we do, like eating supper and going to bed. This is Buddhism."

One reason for the continuing appeal of Zen is its emphasis upon practice as a way of life. The Zen master puts it beautifully in one lecture: "When you do something, you should burn yourself completely, like a good bonfire, leaving no trace of yourself." If he were alive today, Suzuki would obviously not approve of people who talk on their cell phones while driving or walking down the street. Single-mindedness, not multitasking is the right path; it means living in the present moment and doing one thing at a time.

Suzuki has many cogent observations on meditation practice and the values of repetition, the constant way, not attaching to attainment, and achieving equanimity which he equates with "an unperturbable spirit." Perhaps the best summary of this Zen classic is found in a phrase the author uses to describe meditation — "a general housekeeping of the mind." 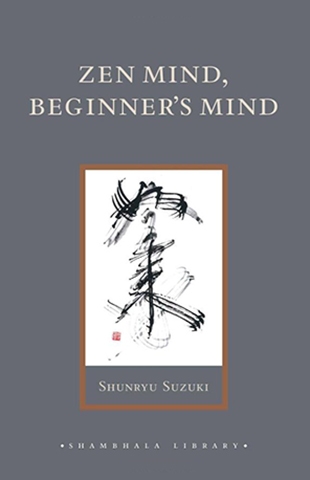