9-11 Meditations at the Center of the World

By Eugene Kennedy
Ponders the sacramental mystery of this tragedy.

Eugene Kennedy is an award-winning author, syndicated columnist, and professor emeritus of psychology at Loyola University of America. For this former priest, the events of September 11, 2001, are laced with sacramental mystery.

In her poetic introduction to this paperback, former New York Times columnist and bestselling author Anna Quindlen states that the loss of life that day aroused "a kind of overweening empathy as persistent and powerful and unmistakable as the smell of smoke." We felt it, she suggests, "in a place deep inside that some of us had ignored, some overlooked, some let lie fallow, some denied." It happened in New York and outside Washington, D.C., and "it happened in our souls."

Beginning with a chapter titled "The Last Day Of Ordinary Time" and ending with "Build Anything, Ground Zero's Spirit Will Still Be There," Eugene Kennedy provides a series of sacramental probes on this catastrophic event and its reverberations on the national psyche and soul. In a startling metaphor, he writes: "Manhattan has been washed in the blood of the lamb, and Ground Zero is sacred because its ruins are imbued with the mystery of the lives that were lived there. This is our century's Titanic, this shipwrecked vessel from whose passengers, crew, and rescuers we learn more every day about what makes anything sacred. How could we miss it? How can we not eat and drink of this powerful sacrament?"

Kennedy ponders that day's events and the following months for signs of grace and meaning. He salutes the manifold ways in which Baby Boomers, who have been castigated for their self-absorption, revealed "the depths of their character, the beauty of their hearts, and the generosity of their souls." He finds ample evidence of God's presence in the stories of love which swept across the nation — the love of those who reached out to their families in their final moments, those who sacrificed their lives for others, those who gave of their time and all their energy in the search for bodies.

Kennedy meditates on the meaning of Ground Zero in Manhattan, the plane crash crater in Pennsylvania, and the ruined section of the Pentagon outside Washington as sacred sites: "They are now the center of the world of spiritual truth, places where so much seems to be lost but where everything important about us is also found." The rescue workers call the World Trade Center wreckage "The Site," he notes, and then poetically explicates the many meanings in that word: " 'Site' is medicine's word for the place in the body where the blow was struck, the wound suffered. 'Site' also refers to the place at which the fertilized egg attaches itself to the womb. 'The Site' speaks to us of the wound and the womb, of a place of suffering that may lead to death and of a place of joining that is the beginning of life."

At the core of Kennedy's spiritual reading of September 11 is his reverence for the spiritual practice of mystery: "We cannot 'deal with' this event. We can only respond to it, and that requires us to enter this mystery of loss." This shattering tragedy brought to the center of our consciousness the sacredness of every moment of life and the deep and fulfilling ways we are connected to other people. In the most beautiful sentence in the book, Kennedy writes: "Our vocation is to see that no one suffers alone, that no pain goes unnoticed, and none is without meaning."

This is the blessing that has come out of September 11 for all those who have eyes to see and ears to hear. We are called to a high and holy vocation for the duration of our lives in the twenty-first century: to ensure that no one suffers in isolation, that no pain is unheeded, and that none is without meaning. 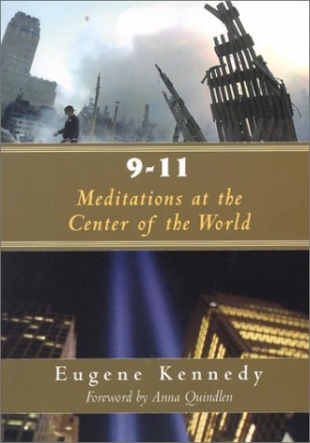