Gandhi the Man The Story of His Transformation

By Eknath Easwaran
An extraordinary spiritual biography of the great Indian leader and the sources of his incredible vigor, single-mindedness, and soul-force.

Albert Camus wrote: "Great ideas come into the world as gently as doves. Perhaps then, if we listen attentively, we shall hear, amid the uproar . . . a faint flutter of wings, the gentle stirring of life and hope." It is a metaphor that applies very well to the impact of Mahatma Gandhi (1869 - 1948), the ethical giant who united his diverse homeland of India under a banner of moral idealism. Satyagraha is the name he gave to his nonviolent methods of fighting and overcoming injustice. It means 'holding on to truth" or "soul force."

In this extraordinary biography of Gandhi, Eknath Easwaran, the author of many books on meditation and the spiritual life, writes about the transformation of this lawyer into a "great soul." When he was a young man the author met Gandhi, not to observe his political style but to sense what was behind his amazing single-mindedness, energy, and personal magnetism. Even in his seventies, Gandhi impressed all those who encountered him with his vigor. Easwaran calls him "a model T with a Ferrari engine." He slept only a few hours every night, was involved in his mission all the time, and yet was never driven but always calm within. The author believes that one of the secrets Gandhi learned early in his career was "to look on every difficulty as an opportunity for service, a challenge which could draw out of him greater resources of intelligence and imagination."

The Bhagavad Gita was always available to him in his youth but only in the midst of troubles in South Africa did Gandhi turn to it as his "spiritual reference book." Although Easwaran writes about his simplified lifestyle, his solidarity with the poor, the interplay between religion and politics, the humanizing practice of nonviolence, and the reverence for life; the real emphasis here is upon being aflame with love. The key to Gandhi's transformation was that he took off his mask and made himself into a zero so he could better serve others. It was only then that he found within himself the zeal and the fearlessness to fulfill his mission. Easwaran writes: "Gandhi used to put the matter bluntly: when another person's welfare means more to you than your own, only then can you say you love. Anything else is just business, give-and-take. To extend this love even to those who hate you is the farthest limit of ahimsa. It pushes the boundaries of consciousness itself. Gandhi was a pioneer in these new realms of consciousness. Everything he did was an experiment in expanding the human being's capacity to love, and as his capacity grew, the demands on his love grew more and more severe, as if to test what limits a human being can bear. But Gandhi had learned to find a fierce joy in these storms and trials. . . . By the end of his life he was aflame with love."

Easwaran also contends that one of the sources of Gandhi's spiritual transformation was his reliance on his mantra Rama. It is a name of the Lord and comes from a word meaning “joy” or “to rejoice.” Gandhi used it all the time when his mind was not occupied. He called this mantra his staff of life that which carried him through every ordeal. He wanted to die with it on his lips, and after a lifetime of practice, that is exactly what happened. 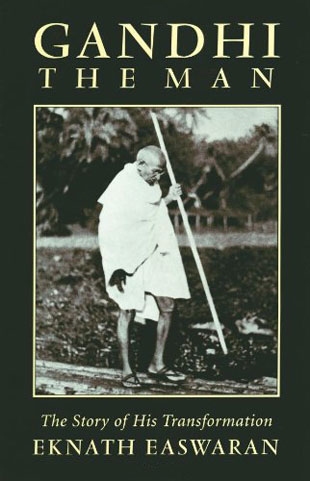