By His Holiness The Dalai Lama, Renuka Singh
Reveals the spiritual practices that are behind this remarkable spiritual leader's genuine smile.

This sturdy and substantive daily quotation book contains 365 selections from the Dalai Lama's writings, teachings, and interviews. The material has been compiled and edited by Renuka Singh, an Associate Professor at Jawarharlal Nehru University in New Delhi, India.

One of the personal attributes of the Dalai Lama, which everyone who meets him sooner or later comments on, is his personal charm, which comes across as joy. The first quotation in this paperback speaks to this: "I love friends. I want more friends. I love smiles. That is a fact. How to develop smiles? There are a variety of smiles. Some smiles are sarcastic. Some smiles are artificial — diplomatic smiles. These smiles do not produce satisfaction, but rather fear or suspicion. But a genuine smile gives us hope, freshness. If we want a genuine smile, then first we must produce the basis for a smile to come."

Despite all the suffering he has endured in exile from Tibet, this holy man is able to genuinely smile. It is possible to look at many of the passages here and find in them reasons for this remarkable ability. The Dalai Lama admits that he spends at least five and a half hours every day in meditation, prayer, and study. In addition, he has over the years cultivated the art of patience in the face of adversity. He believes in the importance of giving with "radiance on your face." He constantly makes note of how much his life and all of our lives depend on the kindness of others. These character attributes, spiritual practices, and intentions are behind his genuine smile. In fact, it is possible to read this entire book as a curriculum on inner joy.

One of the other remarkable dimensions to the life and work of the Dalai Lama is his openness to paradox. For instance, although he abhors all violence and is opposed to the death penalty, he is willing to admit that sometimes the spectacle of violence and crime can be spiritually edifying. Here is another example of his openness to paradox: "The excess of egotism leads to uncontrollable perversions, which always end badly. But from another standpoint, a firm ego, sure of itself, can be a very positive element. You have to have real confidence in yourself." In this example, the Dalai Lama praises contentment while also admitting that too much contentment can lead to laziness. He concludes: "Everything has its limits. Too much consumption or effort to make money is not good. Neither is too much contentment."

The Dalai Lama's Buddhist wisdom is very practical and psychologically astute. Check out this provocative bit of social commentary: "Stealing harms others' property and welfare, and disturbs their peace and happiness. When a house is built, an ugly screen and iron bars are put on the windows to protect what is inside from thieves. Have you ever thought how just the sight of those bars, that screen, makes us uneasy and steals some of our peace and happiness?" The same inner calm and tranquility behind the Dalai Lama's genuine smile serves as an antidote to the fear-based way of living which is so widespread in these times. 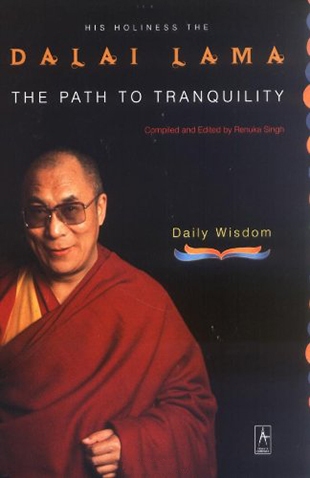