Food for The Heart The Collected Teachings of Ajahn Chah

By Ajahn Chah
Wisdom on meditation, nonattachment, dhamma fighting, and the rewards of patient enduring.

Ajahn Chah (1918 - 1992) was born into a rice-farming family in the impoverished northeast section of Thailand. He became part of a movement to establish simple monastic communities in the country's remote forests. He taught standard meditations of the Theravada school and was rigorous in his application of the Buddhist path to life. Ajahn Chah trained thousands of monks and nuns, including many Westerners. When he died, over a half million people joined the king and queen of Thailand at his funeral to pay their last respects. Over 100 forest monasteries still honor his teachings, and there are more than ten related monasteries in the United States, Europe. Australia and New Zealand.

The Buddha said: "Patient endurance is the supreme practice for freeing the heart from unwholesome states." Ajahn Chah found great comfort and meaning in this wise counsel not to run from suffering, wallow in it, or even tough it out, but simply to pass through it with steadiness. This profound volume gathers all his teachings in one place. It is divided into three sections: Conduct-Virtue and the World of the Senses; Meditation; and Wisdom.

For Ajahn Chah, Buddhism is the religion of the heart. The book contains many instructions about training the heart through meditation, morality, and wisdom. Here is one example: "People don't really look at these things. Like the housewife washing the dishes with a scowl on her face. She's so intent on cleaning the dishes, she doesn't realize her own mind's unclean! She's looking too far away, isn't she? People concentrate so hard on cleaning the dishes, they let their minds go dirty. This not good; they're forgetting themselves."

We enjoyed Ajahn Chah's homely phrases draw from his students' experiences. For example: "We must use great patience and endurance. It's just like pulling in a big fish-we gradually feel our way with it. We carefully pull it in. The struggle won't be too difficult; so without stopping we continue pulling it in. Eventually, after some time, the fish becomes tired and stops fighting and we're able to catch it easily. Usually this is how it happens; we practice gradually gathering it together." To resist our countless moods, we must become Dhamma warriors. Greed, aversion, and delusion are formidable hindrances. But, Ajahn Chah believes, practice is the key to everything. 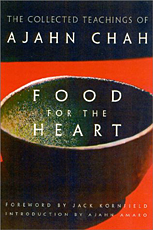