Selections from the Gospel of Sri Ramakrishna Annotated & Explained

"Ramakrishna became the first known prophet in history to proclaim the essential unity of all religions, thus pointing the way to the end of all division and war in the name of religion and pioneering a new planetary civilization, in which all faiths would be honored as complementary and distinct paths to God, different 'dishes' in the heavenly and merciful cuisine of the Mother of her children," writes Andrew Harvey, the editor of this volume in the Skylight Paths Illuminations series. In his enthusiastic foreword, he states that if he had to choose one book to take with him to a desert island to ponder all his days, it would be The Gospel of Sri Ramakrishna. Harvey believes that this Indian mystic models for us a reverence for the Divine Mother and a respect for all religions.

This paperback consists of the essential texts from the original "gospel," an abridged 1942 English translation by Swami Nikhilananda, with facing-page annotations by independent religion scholar Kendra Crossen Burroughs. The conversations with Sri Ramakrishna (1936 - 1886) were recorded by one of his disciples, Mahendranath Gupta. Individuals from many religious traditions have derived wisdom and epiphanies from this Hindu master's insights into the grace of God, keeping holy company, the spirit of renunciation, a yearning heart, practicing the disciplines, desire, a feast of joy, and much more.

In his lifetime, Sri Ramakrishna had bestowed on him the honorific term paramahamsa, which Burroughs defines as one who has reached the highest state of spiritual consciousness — unity with the Divine. She also points out that the word literally means "great swan" in Sanskrit: "In Hindu mythology the hamsa is a sacred bird that represents the ability to discern truth from illusion. From a mixture of milk and water, the swan is said to extract the milk, leaving the water behind. A liberated spirit, the hamsa flies beyond the Himalayan peaks but then returns to ordinary life — an apt symbol for Sri Ramakrishna's ability to soar into the transcendent state of divine intoxication and then return to normal consciousness to share with others the truth that he experienced."

One of our favorite passages from Sri Ramakrishna is this one: "Dive deep, O mind, dive deep in the Ocean of God's beauty; / If you can plunge to the uttermost depths, / There you will find the gem of Love." "Dive deep" is a wonderful mantra to use whenever we are dazzled or bewildered by the manifold mysteries of life and of God. There is little to be discovered on the surface; we must plunge to the depths. 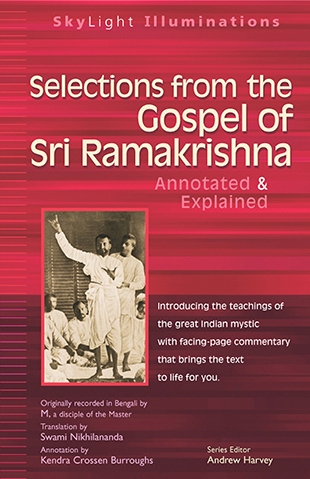