The Haunt of Grace Responses to the Mystery of God's Presence

By Ted Loder
An amazing collection of sermons that might just change the color of your mind.

In this splendid collection of sermons, Ted Loder marvels at the resiliency of Christian faith and its "dancing partner" of imagination. The author has spent 45 years in the professional ministry of the United Methodist Church, 38 of them as Senior Pastor of the First United Methodist Church of Germantown in Philadelphia. Loder takes pride in the fact that a journalist once called his congregation "the oddball church." He leads a community of saints who have been at the creative edge of artistic endeavors, political activism, and social justice. This energetic preacher constantly comes up with fresh treatments of Scripture and adventuresome challenges for living out the vibrancies of the kingdom of God.

We like it that Loder has a healthy respect for the spiritual practice of mystery: "Surely mystery is an essential ingredient, if not the essential of our common life and this earth in which we are all rooted. By mystery, I do not mean the vast oceans of knowledge in which we have not yet swum or not yet mapped. By mystery, I mean the infinite depths of being that we can never plumb, never know, never exhaust, given the limits of our mortality, our finitude, our creatureliness." Part of this mystery is the magnificence of divine grace which haunts us (hence the title of the book).

According to the author, Charlotte Bronte once said that Christian faith changed the color of her mind, like wine in water. Loder is convinced that his faith has shaped the way he sees himself and the world around him. It is not so much assent to doctrines or to an institution but to a dynamic process that keeps expanding and deepening. Loder's faith is constantly foraging in new fields of wonder. It is animated by imagination. He agrees with Richard Feynman, Nobel Laureate in Physics, who said that this faculty is "stretched to the utmost . . . just to comprehend those things that really are." In various sermons, the author gives us much to ponder with his distinctive takes on divorce, gratitude, hope, learning to be loved, generosity, and much more.

Loder speaks to the fears and the apprehensions afoot in the culture at the present time and urges Americans to move beyond a fear-based life. "Maybe we need to build an annex to our national heart so it will hold not only Americans but humanity." The war on terrorism as a crusade can only lead to more violence. Loder offers another option: "We need to raise our voices calling for the causes of terrorism to be addressed as well as its effects to be stemmed. More than one-third of the populations of the world's poorest countries, including Palestine, is under fifteen years old. They see a bleak future for themselves. That makes them easy recruits for suicide bombing missions. Terrorism is fed by poverty. It is fed by hunger, disease. It is fed by the despair of being marginalized, dehumanized, exploited." In the same sermon, Loder quotes theologian Reinhold Niebuhr: "The self-righteous are guilty of history's greatest cruelties. Most evil is done by good people who do not know they are not good." These words deserve serious and prayerful thought.

We don't usually put fear and freedom together in our minds. But Loder helps us do just this with the following: "Freedom is indeed a precious gift. But freedom is more than having choices at the mall, or in the voting booth, or in the unbridled pursuit of personal pleasure. I passionately believe that our deepest longing is for the freedom Jesus spoke of, lived out, and calls us to share: the freedom not to be afraid. Even small doses of that freedom will enable us to live in the world differently." This preacher urges us to banish fear from our lives and step into that freedom. The Haunt of Grace by Ted Loder is an amazing collection of sermons that might just change the color of your mind. 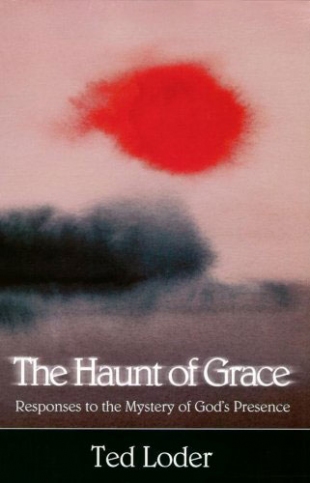