By Michael Berg
Presents sharing as a practice that gives meaning to lives and helps make things better in the world as well.

"Kabbalah teaches that transformation means becoming a being of giving and sharing. This refers to more than acts of sharing. It means connecting with the Light, becoming one with the Creator, and making your essence and the essence of the Creator one and the same," writes Michael Berg, one of the key figures, along with his father Rav, at the Kabbalah Centre which has branches in many countries and a website, www.kabbalah.com. He has just completed producing an English translation and commentary of the Zohar, the comprehensive text of this 5,000-year-old tradition.

Berg believes that the mystical wisdom of this way speaks to the modern condition and is filled with practical tips. Kabbalah teaches that the creation of the world is an on-going process and that we are in partnership with the Creator. The whole point of life is to share with others the bounties we have received. The tools and the teachings of Kabbalah can help bring about this transformation in us. According to Berg, self-serving desire is the single barrier that separates us from the Creator and it comes in many forms. Money, Fame and Power are three. None of us can cast off this desire but we can turn it around by giving ourselves to others. Or, as the author puts it, "At least half of what we do in the world ought to be directed toward assisting others."

In a thematically rich chapter, Berg presents the 12 Laws of the Way, which include hear the voice from above, realize that we are always being tested, be never satisfied, use death as motivation, and don't judge others. We are especially drawn to the idea that we're all in this together, which means that the goodness we put out for others has a positive and transformative effect on the whole world. An even more relevant spiritual truth is that self-serving desire is one of the basic causes of what Berg calls a "circle the wagons" state of mind built upon fear and paranoia. True sharing, according to The Way, is the antidote to this malaise. 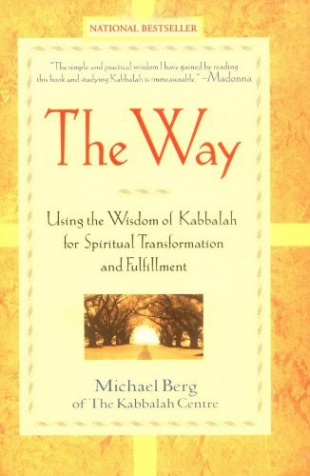