By Jean-Pierre Cartier, Rachel Cartier, Thich Nhat Hanh
Demonstrates that practice is the key to spiritual transformation in everyday life.

Jean-Pierre and Rachel Cartier are French journalists who write on spiritual, artistic, and philosophical subjects. In this work translated by Joseph Rowe, they describe their experiences on a retreat at Plum Village, a religious community in southeastern France founded by Thich Nhat Hanh, the Buddhist teacher, poet, and peacemaker. In a preface especially written for this edition, there is an interview with the authors.

The Cartiers are amazed at how often they hear the term sangha during the retreat. Thich Nhat Hanh says: "A Vietnamese proverb says that if a tiger comes down from its mountain, it will be killed by humans. This also applies to practitioners. If they abandon the sangha they will be lost, for the conditions of life in the world will sooner or later drag them back into forgetfulness and sleep. If they are to resist this current, they must rely on the bastion of protection which is the sangha."

The authors are quite impressed with the sincere and dedicated people they meet at Plum Village, and their interviews with them are quite fascinating. It becomes clear that all of them are diligent practitioners of meditation and attentiveness as taught and incarnated in Thich Nhat Hanh. He mentions again and again "This is possible now." The present moment is just the right moment for seeing deeply and being compassionate.

There are excellent chapters on meditation in action, emotions, and equanimity, saved by the bell, living permanently with impermanence, and the five precepts. The most satisfying dimension of this paperback are the extensive excerpts from the talks given by Thich Nhat Hanh on a variety of topics. Check out his insights into treating the body with respect, giving your brain a rest, doing walking meditation on stairs, and not watering the seeds of negativity inside yourself with the toxins of violence and powerful thought-forms. Thich Nhat Hanh: The Joy of Full Consciousness is a real treat from start to finish. 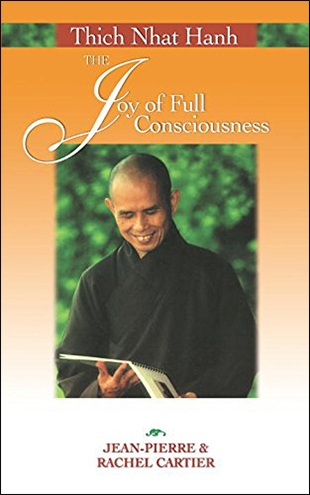