By Susan Perry
Pays tribute to this Japanese teacher, founder of a martial art that is both spiritual and nonviolent.

"The secret of Aikido is not how you move your feet, it is how you move your mind. I'm not teaching you martial techniques. I'm teaching you nonviolence," said Morihei Ueshiba (1883 - 1969), the founder of this Japanese martial art that emphasizes harmony, cooperation, and nonresistance. For him, the essence of the budo (a martial path) is love, and he urged his students to act in "the spirit of loving protection for all of God's creation."

Susan Perry is editor-in-chief of Aikido Today Magazine, an international publication that she started in 1987. In this fascinating collection of reminiscences by O-Sensei's students and followers, we see the man as a teacher, a ferocious martial artist, a deeply religious person, and a visionary. The book is divided into four sections: students reflect upon their first encounter with O-Sensei; those whom he taught talk about the lessons they learned from him; they recall his personal habits and approach to everyday life; and students and followers reveal their teacher's spiritual legacy to them.

O-Senei was a formidable man with piercing eyes and exquisite rhythm, strength, and speed. Motoiche Yanase recalls: "O-Sensei's body was not hard, it was soft. And yet those who grabbed him always spoke of their power draining away. It was as though his body negated or absorbed your power." He would throw people without effort and could pin a person using just one finger. When his students tried to move him, he remained in one spot, like a mountain. It is said that when O-Sensei was in Manchuria, he was able to dodge bullets since he knew where they would go.

Although on the mat he was totally focused and strict, off the mat students found him to be generous and kind. He loved to practice calligraphy and work in his garden. "Do the Aikido that cannot be seen by the eye," he told his students. That is his spiritual legacy to many. Giji Munetaka Kuki sums up: "O-Sensei said Aikido is not about technique, but that it is about how humans should live their lives. Aikido is not really about theory or rationalization. The spirit of Aikido is to create a sphere, a warm sphere, a warm circle of harmonious feeling among people so that people can get along with each other with warm-hearted feeling." 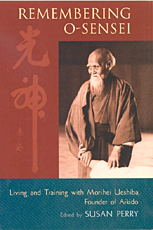