By Kerry Walters
A soul-stirring resource charting some of the transformations that can occur during these tense times.

Since the 9/11 terrorist attacks, many Americans have been feeling uneasy. Kerry Walters, professor of philosophy at Gettysburg College in Pennsylvania and editor of Rufus Jones: Essential Writings, is convinced that one of the major lessons of this tragedy is coming to terms with our dread of insecurity and our obsession with safety. "Smart bombs and bigger defense packages and armed national guardsmen at airports won't heal our deeper woundedness, even though it might make us feel safer in the short run. Unless we resolve to face it squarely, our horror of vulnerability will continue to fester in our spiritual innards."

Kerry regards Jacob as "the patron saint of all who dread vulnerability." He outlines the formative events in his life culminating with his terrible night on the Jabbok when he came to see that wounds can bring blessings. Jesus taught the same thing in his experience of insecurity, vulnerability, and dying on the margins; he had to surrender completely to the Father. Kerry turns to Catholic activist Dorothy Day who spoke of her mission in terms of "precarity," which connotes living in a risky situation without a safety net. "A spirituality centered on precarity," notes the author, "acknowledges the radical uncertainty or contingency of human existence and our utter dependence on God."

Perhaps Martin Luther was correct when he stated that security is the worst idol. We seem willing to give up almost anything in order to find a safe place to hide apart from the turmoil and the treacheries of a risky world. Hence the phenomenon of gated communities and the recent surge in sales of security systems, efforts to protect ourselves from the dangerous stranger, "the other" at the gates. But as Kerry points out, the early Christian practice of hospitality was extended not only to family and friends but to outsiders. Such openness to others offers an antidote to the fortress mentality or the "guns-and-fists mode of responding to threats of safety."

Kerry turns, in the last chapter, to Christian writer Henri J. M. Nouwen's image of downward mobility, which is the complete opposite to the upward mobility promoted and touted by the culture. The later emphasizes power and playing the competition game to the hilt. Jesus demonstrated the path of downward mobility in his identification with the poor and the powerless. Today, we have a chance to take this path in solidarity with all those who suffer and are considered unworthy. They have been assured by Jesus that they have nothing to fear, they are loved and are part of the kingdom of God.

Jacob's Hip: Finding God in an Anxious Age by Kerry Walters is another invaluable resource charting the spiritual breakthroughs and transformations that can happen during these tense times. 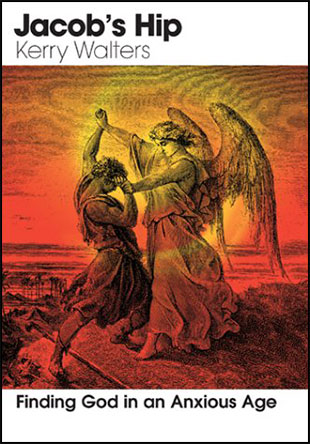