By Peter Malone, Rose Pacatte
Relates films to the Gospel readings from Mark, making it a valuable resource for preachers and small groups in Christian parishes.

This is the second volume linking themes of popular films with the Gospel readings in the lectionary used by many Christian parishes; in Cycle B, they are from Mark. The authors, Peter Malone and Rose Pacatte, are Catholics, but this resource will appeal to Christians of most denominations. Seventy-four flms are covered with plot synopsis, background information on the film, key scenes, questions for reflection and conversation, and a prayer.

Malone and Pacatte do an especially fine job fleshing out the significant themes in The Truman Show and in A.I.: Artificial Intelligence. We were also happy to see them give proper respect to these films that were overlooked by the public and by critics: Second Best, At First Sight, and The Mighty. The many shades of love expressed in Moonstruck, Rain Man, and The End of The Affair are lifted up and saluted.

This resource and its companion are highly recommended to Christian parishes. Now that so many movies, current and old, are being released on affordable DVDs, every parish should consider having a library of meaningful films. 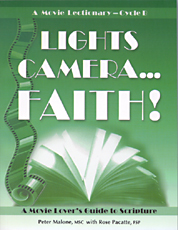