The Spirit of Buddhism The Future of Dharma in the West

By Sogyal Rinpoche
Lays out this Tibetan teacher's vision of the dharma for modern times.

Sogyal Rinpoche is the best-selling author of The Tibetan Book of Living and Dying which has sold over a million and a half copies. In his first work in ten years, this Tibetan spiritual teacher and founder of Rigpa, an international network of Buddhist groups and centers, presents two conference addresses and two articles which address the major issues facing Buddhism in the West, a look at the healing power of the mind, and spiritual guidance for those on the path of practice. Sogyal Rinpoche is well versed in the same tradition as the Dalai Lama and in this brief volume he sums up concerns that have been foremost in his mind over the past 25 years of teaching Buddhism in the West.

The author believes that it is an honor to pass on the teachings of the Buddha regarding meditation practice, training in compassion, and understanding the nature of mind. Sangha, or spiritual community, is very important in the United States because everyone needs support. As the Dalai Lama wisely put it: "In the East, even if you don't want to practice, the culture draws you in; in the West if you do not want to practice, the culture pulls you back." The future of Buddhism is bright since it has already influenced hospice care, mind/body medicine, psychology and therapy, interfaith dialogue, movements for peace and nonviolence, and ecology and green issues.

In his discussion of "The Spiritual Heart of Tibetan Medicine," Sogyal Rinpoche reveals the importance of training the mind and meditation. In the last two pieces, he examines some of the obstacles to those on a spiritual path including ignorance and "wrong view" consciousness. The four selections in this book clarify Sogyal Rinpoche's vision of the future of Buddhism in the West. 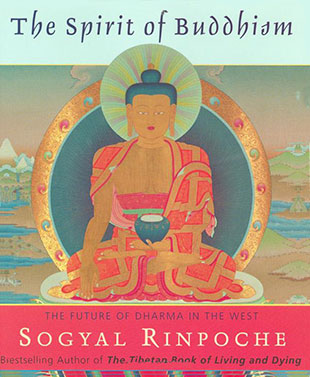