The Path A One-Mile Walk Through the Universe

By Chet Raymo
Will induce you to cherish the wonders in the place where you live.

Chet Raymo is the author of An Intimate Look at the Night Sky, Natural Prayers, and other books. His column, “Science Musings,” appears weekly in the Boston Globe. A professor emeritus of physics and astronomy at Stonehill College, he lives in North Easton, Massachustts.

For nearly 40 years, Raymo has walked the same path from his home to the campus. For this man of science, nature is filled with wonders, and it is part of our assignment as human beings to take in the glories. Some of us are convinced that we need to travel abroad to have our breath taken away by astonishing sights. Raymo demonstrates the path of reverence close at hand: “Step by step, year by year, the landscape I traversed became deeper, richer, more multidimensional, always overflowing the mind that sought to contain it. Ultimately, almost without my willing it, the path became more than a walk, more than an education, more than a life; it became the Path, a Tao (Way), a thread that ties one human life and the universe together.”

Raymo is a skilled teacher of the art of making connections. Nothing exists on its own; it is always tied to hundreds of other things. The author claims that there are some sights he was privileged to catch only once on the path: a single blossom of wild columbine, a kingfisher by the stream, and a dog stinkhorn mushroom. But by paying close attention to the woods, the meadow, and the stream on his daily route, he has been able to bring the tropical rain forests and far-away deserts closer to his consciousness. He is taken aback by little things, such as the realization that a weed on the path may be there thanks to a seventeenth-century sailing ship. Raymo describes the wild flowers he sees as ornaments, and that seems to be just the right word given his frequently festive mood.

The author has been tutored in the arts of long-looking and wonder by Ralph Waldo Emerson, Gilbert White, Walt Whitman, and other poets. Whether writing about biodiversity, the loss of many species, the mystery of the world, or the 100,000 miles of stone walls in New England, Raymo draws out our capacity to see things afresh and with gratitude. He concludes this delightful excursion with: “Along the one-mile walk of the path, I have found these ostensibly competing tendencies happily fused: order and surprise, artificial and natural, civilized and wild, human self-interest and organic wholeness.” The Path will induce you to cherish the natural wonders in the place where you live. 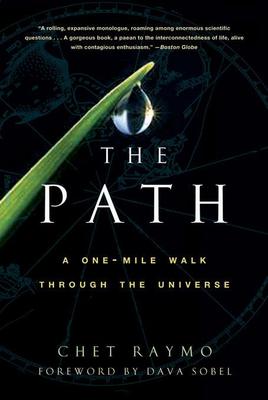