The Inner Experience Notes on Contemplation

By Thomas Merton, William H. Shannon
Describes the rewards and riches of this Christian spiritual practice.

This is the last book written by the prolific and versatile Trappist monk Thomas Merton. He was working on this examination of the contemplative life at the time of his death in 1968 even though it was put together in 1959. Scholar William H. Shannon sees it as a bridge between Merton’s early work on monasticism and mysticism and his later work on Eastern traditions and religious thought, especially Buddhism. Some of the themes covered include society and the inner self, the paradox of the illuminative way, contemplation and neurosis, the sense of sin, and problems in the contemplative life.

Early on Merton writes that "this book has no intention of solving anyone’s problems, or of offering anybody an easy way out of his difficulties. . . . One of the strange laws of the contemplative life is that in it you do not sit down and solve problems: you bear with them until they somehow solve themselves.” Whether talking about the Tao, bhakti yoga, or the Desert Fathers, the author weaves the wisdom of different traditions into the material he is assessing with natural ease, thus proving himself to be a daring pioneer of interspirituality.

This Christian spiritual practice revolves around the constant nourishment of the interior life. But there is no striving to achieve success in devotion: “The true contemplative is a lover of sobriety and obscurity. He prefers all that is quiet, humble, unassuming. He has no taste for spiritual excitements. They easily weary him. His inclination is to that which seems to be nothing, which tells him little or nothing, which promises him nothing. Only one who can remain at peace in emptiness, without projects or vanities, without speeches to justify his own apparent uselessness, can be safe from the fatal appeal of those spiritual impulses that move him to assert himself and 'be something' in the eyes of other men.” This fascinating passage is very similar to Buddhist teacher Chogyam Trungpa’s ideas on the dangers of spiritual materialism in religious achievements. These leaders from different traditions are right on target with their warnings against spiritual pride.

Through regular practice, the Christian contemplative brings to fruition the seeds of what Merton calls “the sublime life” planted in every soul at baptism. He ends this important addition to his wide-ranging collection of books with these sentences on divinization: “That was why St. Gregory of Nyssa said that the contemplative, who had restored in his own soul the image of God, was the truly free man: for he alone could walk with God as Adam had walked with Him in Paradise. He alone could stand and speak freely to God his Father, with complete confidence. He alone could worthily bear his dignity as son of God and king of God’s creation.” 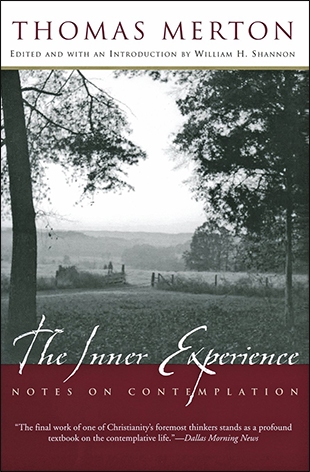