Beside Still Waters Jews, Christians, and the Way of the Buddha

In the introduction to this important and worthwhile anthology, Jack Miles, a Christian author, notes: "The Buddhist presence in the religious world is far larger than a head-count of Buddhists can reveal." The editors agree. Harold Kasimow, George Drake Professor of Religious Studies at Grinnell College in Iowa; John P. Keenan, professor of Religion at Middlebury College and vicar of St. Nicholas Episcopal Church in Scarborough, Maine; and Linda K. Keenan, who taught Japanese language and literature at Middlebury College have gathered personal accounts from Jews and Christians who have engaged in Buddhist practices and found, in most cases, that they deepened and enhanced their relationship with their birth religion. The editors state: "Without openness and interchange between the traditions, we are each and every one impoverished — our understanding limited by the filters of our particular monocultural faith and insulated from outside influences — while we cling to the nostalgic surety of the familiar." Their aim here is to "practice an ancient art — religious thinking and reflection on faith."

Sylvia Boorstein, a co-founding teacher of Spirit Rock Meditation Center and author of many books, displays her usual candor when she writes: "It isn't for me, about being a Jew or a Buddhist or a Jew and a Buddhist. It's about being a person paying attention to what works for me and to keep my mind and heart peaceful, my life meaningful." Alan Lew, a founding director of Makor Or, a center for Jewish meditation, and rabbi of Congregation Beth Sholom in San Francisco claims that he has seen many Jews open to the bottomless richness of their own tradition after experiences with Buddhist meditation practices. One of our favorite Jewish spiritual teachers, Rabbi Zalman Schachter-Shalomi, puts his dance with Buddhism in the following context: "Alan Watts once said about himself that he had 'graduated' from the Anglican Church. He didn't want to say that he repudiated the Church. And I feel the same way — that I graduated from Habad Lubavitch Hasidism. That's not to say that the Lubavitchers are a bad 'school.' They are a great school, but some people get fixated in first grade all the time." Over the years, he has used spiritual practices from all of the world's religions in his work of bringing people closer to spirit, liberation, and loving.

A number of eloquent essays by Christians cover the subtle but lasting effects of Buddhist practice on their faith and ethical pursuits in the world. We were especially impressed with those by Ruben L. F. Habito, Elaine MacInnes, and Robert A. Jonas. The latter, who is director of The Empty Bell contemplative center in Watertown, Massachusetts, writes in a poetic vein: "Buddhist meditation and my soul friendship with St. John of the Cross and other Christian mystics have introduced me to a Jesus who is continually appearing and disappearing in my most private thoughts and emotions, in other people, and in the water, trees, and rocks. He is free of any particular form, and the detachment I've learned through meditation has helped me to recognize his formless form. He is my Heart Sutra and, as Grandma taught me, the only one who lives in my heart."

As E. Burke Rochford, Jr., professor of Sociology and Religion at Middlebury College, points out in his essay, most Jews and Christians who have been influenced by Buddhism see it as a complement to their faith, not a competitor. Many of these same individuals see no need to blend the two into a new personal religion. In his insightful concluding essay, Norman Fischer, founder and teacher of the Everyday Zen Foundation and co-director of Makor Or, a Jewish meditation center in San Francisco, states that Buddhism is very strong on liberation and self-realization, two essential thrusts of contemporary spirituality in America today. Beside Still Waters is a watershed work in the increasingly important area of multifaith studies. 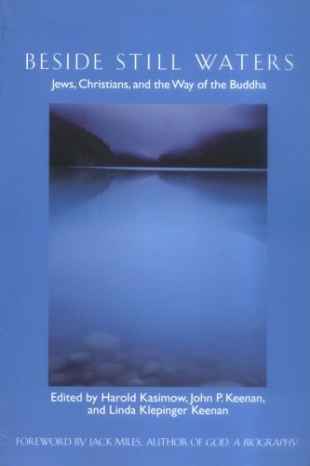