The Art of Happiness at Work

By His Holiness The Dalai Lama, Howard C. Cutler
Makes a good case for inner transformation and mind training as avenues to freedom and fulfillment on the job.

In The Art of Happiness: A Handbook for Living, psychiatrist Howard Cutler shared with the world his private conversations with the Dalai Lama, along with material from the Tibetan leader's public teachings. Having been deeply impressed with the Dalai Lama's sense of fulfillment and serenity, Cutler asked him about the practices that could help the rest of us become "happier, stronger, perhaps less afraid.” The book has sold well over a million copies in hardcover.

In this new collaboration, the subject is happiness at work. It's no wonder, really, that the Dalai Lama can speak to this important topic. As Robert Thurman pointed out in Inner Revolution, Tibetan civilization at the time of the Chinese invasion in 1950 was the result of 2,500 years of enlightenment culture with an emphasis upon freedom from negative emotions and obsessive self-concern. The Dalai Lama shows us how such inner liberty can affect our work lives.

Cutler begins by discussing the dissatisfaction most people have expressed about their jobs. The Dalai Lama immediately responds that individuals need to realize that it only takes small changes in one’s attitude to bring about refreshment in the midst of work that has lost its savor. He suggests seeing the job from a wider perspective. "Another way to build contentment," he adds, "is simply to reflect on how fortunate one is to have the work, how there are many people unable to get any kind of work. You can think, There are other good things in my life, and I still have it better compared to many. This is always the reality."

Cutler points out that he has noticed that many of his psychotherapy clients resist giving up their misery. They seem to nourish themselves on sour grapes. Letting go of this resentment and anger on the job is essential if one is to achieve optimal mental, physical, and spiritual well-being. The exact opposite of this relishing of misery was demonstrated by the many Tibetans who endured terrible suffering, starvation, and torture in prisons and still were able to practice compassion for their captors. Cutler suggests that we follow the Dalai Lama’s advice and use our lives as laboratories for practicing kindness, compassion, and equanimity. The workplace is an excellent location for this activity. One person consistently being cheerful, open, and kind can transform that environment.

Another major source of worker dissatisfaction revolves around the widespread feeling of men and women that they are not being paid enough for what they do. This often results in toxic feelings of anger and discontent. The Dalai Lama contends that money is a poor source of self-esteem and the constant focus on it can lead to unrelenting suffering.

Boredom and lack of challenge at work can also lead to unhappiness. The antidote to this malaise is the spiritual practice of enthusiasm and welcoming challenge as a way to sharpen your mind. Cutler talks about how many of us yearn for a sense of flow while working — those moments when we are so caught up in what we are doing that time seems to fall away. The Dalai Lama regards the flow state as not reliable or sustainable" and suggests instead: "Dealing with one’s destructive emotions while at work, reducing anger, jealousy, greed, and so on, and practicing relating to others with kindness, compassion, tolerance: these are much more important and stable sources of satisfaction than simply trying to create ‘flow’ as much as possible."

Of the three major ways of understanding work — as a job, as a career, or as a calling — it the latter that can make all the difference in the world. Individuals who have this attitude toward their work would continue doing what they do even if they weren’t paid. The Dalai Lama states: "If you see your work as a calling, that would definitely help your mind not to tire easily. It would reduce boredom, and give you a greater sense of purpose and resolve. And with that view, you could maintain your interest and enthusiasm even if you didn’t get a pay raise of a promotion."

A key theme of this book is that self-understanding is critical to finding ultimate happiness at work. The Dalai Lama is convinced that both an inflated sense of self (arrogance) and a diminished sense of self (low self-esteem) are destructive. He opts instead for genuine self-awareness that eschews both of these extremes. Of course, this ordained monk, leader of the Tibetan people, Buddhist scholar, peacemaker, and statesman is a living exemplar of right livelihood and joyful living.

The Art of Happiness at Work makes a convincing case for inner transformation and mind training as preludes to both freedom and fulfillment on the job. Thankfully, the conversations between the Dalai Lama and Howard Cutler on this subject and others will continue in more books to come. 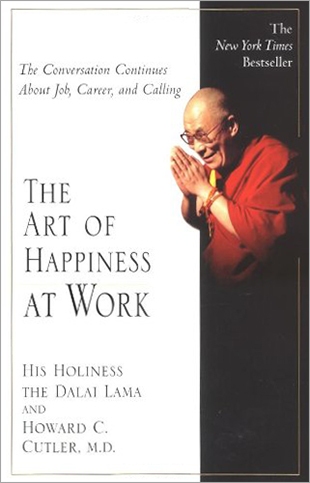