Owls and Other Fantasies Poems and Essays

By Mary Oliver
A collection of poems and essays paying tribute to the awe-inspiring qualities of birds.

Poet and Rumi translator Coleman Barks has observed that all the mystical traditions revere birds and their songs. They represent our yearnings for purity, freedom, play, and soaring. Mary Oliver, winner of the National Book Award and the Pulitzer Prize for Poetry, loves birds as well and has gathered twenty-three of her poems about them, including ten never before collected. There are also two awe-inducing essays, one about owls and another about an injured black-backed gull.

In "Yes! No!" Oliver writes: "To pay attention is our endless and proper work." She is a great teacher of the art of staying alert in the present moment. These poems and essays are so well-crafted and so focused that while reading them, all our senses snap to attention. We are ready for anything, and so is Oliver. In "Goldfinches," she watches some goldfinches having "a melodious argument at the edge of a puddle" about who should be first. She ponders the meaning of this while the birds splash around and have a good time. When they fly off, the poet marvels at "their tiny feet, all washed, clasping the air." In "Such Singing in the Wild Branches," Oliver recounts a mystical moment of union with a bird when she knew what he was saying. And in "Starlings in Winter," the poet envisions what it would be like to "be light and frolicsome," winging her way through the air with abandon and delight. In these three poems, Oliver hurrahs our subtle and sweet connections to the surprising kingdom of birds.

In the formidable essay titled "Owls," Oliver writes about this predatory creature and concludes: "The world where the owl is endlessly hungry and endlessly on the hunt is the world in which I live too. There is only one world." The mood is totally different in "Bird," an essay in which the author recalls her attempt to restore the health of a badly injured gull she finds on the beach. Anyone who has ever rescued an ailing animal will be able to identify with the deluge of emotions which surge through this brief piece.

In "Long Afternoon at the Edge of Little Sister Pond," the poet notes: "Every day I walk out into the world / to be dazzled, then to be reflective." All these poems and essays dazzle us and then send us into deep reflection about the marvels and mysteries of life that come to us in the sightings, songs, and soaring of birds. 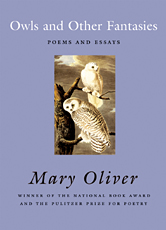