Shakti Mantras Tapping into the Great Goddess Energy Within

By Thomas Ashley-Farrand
Chanted prayers that can bring alive the Sacred Feminine within us.

According to Thomas Ashley-Farrand, a Vedic priest and American specialist in the use and meaning of Sanskrit mantra discipline, this ancient practice can enhance your spiritual gifts, lighten your karmic burden, improve your health and increase prosperity, and help you live in harmony with the universe. His previous book Healing Mantras: Using Sound Affirmations for Personal Power, Creativity and Healing presented 50 effective Sanskrit chants with their translations. This ambitious and enlightening work shows how to use mantras to tap into the Sacred Feminine energy and power — shakti — that resides in everyone.

Ashley-Farrand points out that the goddess tradition has had a long and fruitful presence in many different cultures, but it has only recently been studied in the West. Sightings of Mary have increased around the world, the Chinese goddess Kwan Yin has come back into prominence, and female gurus such as Gurumayi and Amma are widely respected. Of course, Hindu spiritual seers such as Yogananda, Sri Ramakrishna, and Muktananda covered the impact of the Divine Mother, Kali, and shakti in their writings and practices.

"It is only because the goddess exists in all of us that it is possible to exhibit her attributes," Ashley-Farrand writes. He tells the stories of major Eastern goddesses and then presents mantras (with phonetic spelling for easy pronunciation) that can be used to develop the qualities they embody. For example, Saraswati is invoked for the power of knowledge and speech; Lakshmi for abundance; Durga for protective powers; and Tara for the power of the Divine Mother. 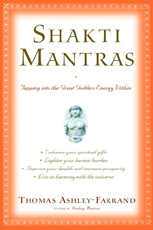