No Room at the Table Earth's Most Vulnerable Children

By Donald H. Dunson
Explores the plight of young people at risk around the world.

Kofi Anan, the Secretary General of the United Nations, has observed: "There is no trust more sacred than the one the world holds with children. There is no duty more important than ensuring that their rights are respected, that their welfare is protected, that their lives are free from fear and want, and that they grow up in peace." Donald H. Dunson agrees. A priest in the diocese of Cleveland, Ohio, he is professor of moral theology at Saint Mary Seminary and Graduate School of Theology in Wickliffe, Ohio. In this hard-hitting work, he identifies the many kinds and large numbers of at-risk children around the world. There are chapters on child soldiers, sexually exploited youth, children who work and never play, hungry kids, refugees, and those suffering from AIDS or who have lost their parents to the disease.

Most people would admit to being committed to the safety, health, and welfare of their own children. Canadian theologian Ronald Rolheiser has observed: "Perhaps there is nothing in this world as powerful to break selfishness as is the simple act of looking at our own children. In our love for them we are given a privileged avenue to feel as God feels — to burst in unselfishness, in joy, in delight, and in the desire to let another's life be more real and important than our own." Dunson argues that we must feel that kind of love and compassion toward children beyond our own households.

Dunson presents stories of the earth's most vulnerable children and makes a good case for taking steps to meet their needs. In the 55 armed conflicts raging across the world in 2002, children were soldiers in almost half of them. The smuggling of youth for the purpose of sexual exploitation has become one of the fastest branches of organized crime. According to the International Labor Organization, over 250 million children work full time in terrible places, such as sweatshops and stone quarries. And more than 200 million homeless children wander cities and villages across the globe.

One of the most touching quotations in the book is from Thomas Merton in Raids on the Unspeakable. It sums up the challenges facing every Christian who seeks to carry on the spirit of Jesus: "Into this world, this demented inn, in which there is absolutely no room for Him at all, Christ has come uninvited. But because He cannot be at home in it, because He is out of place in it, and yet he must be in it, His place is with those others for whom there is no room. His place is with those who do not belong, who are rejected by power because they are regarded as weak, those who are discredited, who are tortured, bombed and exterminated. With those for whom there is no room, Christ is present in the world. He is mysteriously present in those for whom there seems to be nothing but the world at its worst." 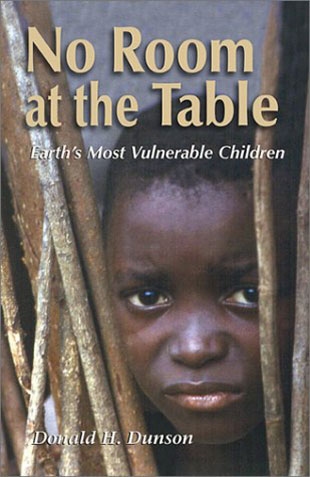