Of Water and the Spirit Ritual, Magic, and Initiation in the Life of an African Shaman

By Malidoma Patrice Some
A powerful spiritual autobiography of a walker between indigenous and modern worlds.

Malidoma Patrice Some was raised in a village in Burkina Faso, West Africa. He is a medicine man and a diviner in the Dagara culture. He also holds three master's degrees, as well as two Ph.D.'s from the Sorbonne and Brandeis, and for three years taught literature at the University of Michigan.

His name, Malidoma, means he who is "to be friends with the stranger/enemy." Some's mission in life has been to create pathways between the African tribal world and contemporary Western culture. He is a genuine pathfinder in a time when these two alien worlds can benefit immensely from each other's knowledge.

Malidoma Patrice Some's autobiography, Of Water and the Spirit offers an incredible behind-the-scenes look at the Dagara people. He was singled out by his grandfather, a priest, leader, and counselor for 50 souls, to serve the tribe in a special way. But before he could move forward in this mission, Malidoma was kidnapped from home by a French Jesuit missionary who had befriended his father. For 15 years, Some was cut off from his tribal roots as he was trained to be a priest. However, he escaped from the seminary at age 20 and in a 125-mile trek through the jungle returned home.

His homecoming produced a crisis in the village since he had been "swallowed by a foreign way of life." The council of elders allowed Malidoma to undergo initiation at age 20. In several remarkable chapters, the author explains what happened to him during a six-week ordeal in the bush with over 60 other young men. Some describes his journeys to otherworlds, his raw encounter with fear and pain, his transformed view of the natural world, and his dreams, visions, and hallucinations. In the end, he notes: "Initiation had eliminated my confusion, helplessness and pain and opened the door to a powerful understanding of the link between my life purpose and the will of my ancestors."

Of Water and the Spirit points out that ritual is the force which can bring power, healing, and community to both the tribal and modern worlds. Some's descriptions of a tribal funeral service and his own journey of initiation make for compelling reading. The author's grandfather once told him: "The sweat of one person has significance only when it serves everybody." Some's book does just that — it serves his ancestors, the tribal elders who sent him into the modern world, and readers like you and me. 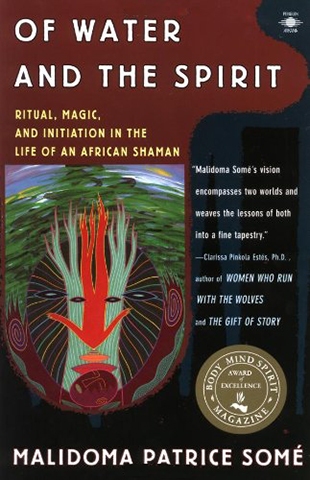