God Is Red A Native View of Religion

By Vine Deloria
Offers Native American spirituality as an alternative to Christianity.

In the 30th anniversary edition of this controversial volume, Native American scholar Vine Deloria, Jr., offers readers a salutary overview of Native American spirituality as an alternative to Christianity. After tracing a brief history of the "Indian Movement" and making reference to novels, anthologies ,and books on Indian religion, this lawyer, who once attended the Lutheran School of Theology in Rock Island, Illinois, faults Christians for (1) their inability to think in terms of space (hence they do not have a good natural theology), (2) their cramped concepts of history focused on the story of the Jews and the life of Jesus, (3) their fear of death, (4) their failure to integrate faith into every aspect of life, (5) their lack of community, and (6) their internal dissension.

Deloria points to the religious hunger in America and sees interest in the occult as a manifestation of the search for a more refreshing and meaningful spirituality. The red man, he says, offers people a religion of community, reverence for the earth, continuity between death and life, a rich treasurehouse of myth and ritual, and a way of understanding the spirit of life on all continents. This edition of God Is Red includes new forewords by Leslie Marmon Silko and George E. Tinker. 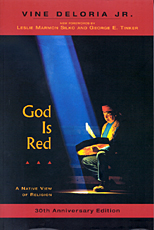