The Violence of Love

Oscar Romero (1917-1980), the Archbishop of El Salvador, spent the last years of his life speaking out against those who perpetrated horrific crimes against the people of his country. He was assassinated for this courageous defense of the poor and the powerless. At one point he said: "It's amusing: This week I received accusations from both extremes — from the extreme right, that I am a communist; from the extreme left, that I am joining the right. I am not with the right or the left. I am trying to be faithful to the word that the Lord bids me preach, to the message that cannot change, which tells both sides the good they do and the injustices they commit."

It is this perspective that comes across in this inspiring collection of quotations assembled by the late James R. Brockman. They seem especially appropriate for thinking Christians who must make important ethical choices as America becomes more paranoid about terrorism and other developments that make them feel unsafe. Romero's thoughts here are organized under these thematic umbrellas: A Pilgrim Church, A History of Salvation, The Idol of Self, Don't Pull Them Up, Evangelizer of the People, God's Justice, The Bright Light of Christ, Option for the Poor, and Good News to the Poor.

Here are a few quotations by Oscar Romero that seem especially appropriate for our times:

"Do not let the serpent of rancor nest in your hearts. There is no greater misfortune than a vindictive heart, even though it be turned against those who have tortured your children, against the criminal hands that have placed them among the missing. Do not hate."

""The purpose of our life is God's glory. However lowly a life is, that is what makes it great."

""What good are beautiful highways and airports, beautiful buildings full of spacious apartments, if they are only put together with the blood of the poor, who are not going to enjoy them?"

""We must not seek the child Jesus in the pretty figures of our Christmas cribs. We must seek him among the undernourished children who have gone to bed tonight with nothing to eat, among the poor newsboys who will sleep covered with newspapers in doorways." 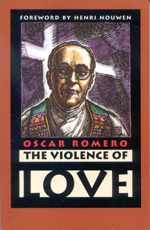