Mother Teresa In My Own Words

By Jose Luis Gonzalez-Balado, Mother Teresa
A fine collection of quotes, stories, and prayers from this Nobel Peace Prize winner.

Mother Teresa has been called a living saint. In 1950 she founded the Missionaries of Charity in Calcutta, an order devoted to serving the poorest of the poor which has since expanded its operations all over the world. Jose Luis Gonzalez-Balado has compiled a fine collection of quotes, stories, and prayers from this Nobel Peace Prize winner. Unlike the misleading bestseller A Simple Path by Mother Teresa which presents mostly the thoughts of her co-workers, this volume actually contains her own thoughts. It is filled with inspirational thoughts such as: "As far as I am concerned the greatest suffering is to feel alone, unwanted, unloved." 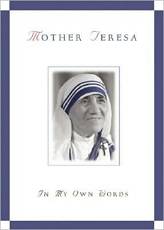