The Golden Age of Zen Zen Masters of the T'ang Dynasty

This classic, a storehouse of Zen lore, originally appeared in 1967 just one year after Philip Kapleau's The Three Pillars of Zen and three years before Sunryu Suzuki's Zen Mind, Beginner's Mind. John C. H. Wu (1899 - 1986) brought together the great Chinese Zen masters of five houses from the seventh through the ten centuries. One of those who was impressed with this resource was none other than Thomas Merton whose introduction, written in 1966, is included here. Near the end, Wu quotes this Trappist monk: "For me to be a saint means to be myself. Therefore the problems of sanctity and salvation is in fact the problem of finding out who I am and discovering my true self." Wu points out that this attitude is very similar to those on the path of Zen or Taoism who have no grand schemes or noble goals other than to be fully human. Of course, walking this path involves struggles, setbacks, doubts, temptations, and epiphanies galore.

"A Zen master, however enlightened he may be," writes Wu, "cannot infuse or instill his own insights into the mind of another. He is at most a midwife who helps a pregnant woman whose hour has come to give birth to her own child." The midwives you will meet on the pages of this endlessly fascinating work use every trick in the book to pull students away from reliance on the mind and get them to step into the present moment wide awake. Or as D.T. Suzuki put it: "Zen always aims at grasping the central fact of life, which can never be brought to the dissecting table of the intellect."

One of the most appealing aspects of Wu's anthology is that he constantly makes links between Taoism, Buddhism and even Christianity. Many of the Zen masters would agree with Seng-ts'an who said:

"There is no difficulty about the pursuit of Tao,
Except that we must refrain from making discriminations.
If a man can only free himself of likes and dislikes,
He will see clearly as in broad daylight."

This quotation by Shan-hiu is a favorite of ours: "With a Taoist cap, a Buddhist cassock, and a pair of Confucian shoes, I have harmonized three houses into one big family." By the time you finish this rousing collection of Chinese Zen stories, poems, koans and quotations, you will have a deeper appreciation for the challenges and fulfillments of attaining your truest self. 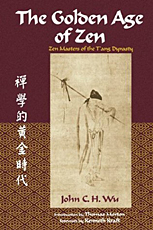