Spiritual Politics Changing the World from the Inside Out

By Corinne McLaughlin, Gordon Davidson
Ageless wisdom to do spiritual readings of international and national events.

"Spiritual forces are moving deeply and powerfully behind the scenes of world events in ways that are not obvious on the evening news. Today's headlines, viewed with the right consciousness, can be seen as a living alphabet through which humanity comes to know itself and God. A deeper meaning is found."

So write Corinne McLaughlin and Gordon Davidson in this exploration of a spiritual understanding of international and national events. They use Ageless Wisdom — the golden thread that connects all the world's religious and esoteric systems — as a map to see the world afresh. They offer a daring, intuitive, and psychological reading of politics that puts the accent on the inner unity of humanity and the need for personal empowerment. Writing in the early 1990s, they apply their principles to discussions of the fall of communism, the spiritual destiny of the United States, and the souls of nations such as Russia and Japan.

Instead of the old paradigm of divisiveness, power plays, and competition, the authors outline the core platform for transformational politics. Here is a systems approach to problems, an emphasis upon win/win solutions, and an attempt to create synthesis out of polarity. What values animate this perspective? A few of them are an open mind, humility and compassion, a willingness to see humanity in opponents, and an ability to live with paradoxes.

It is always difficult to go against consensual thinking about controversial subjects such as religion and politics. McLaughlin and Davidson score a double by tackling both subjects. They know that reframing our habitual ways of looking at things is critically important in these times of world crisis.

Try a Spiritual Practice on Justice 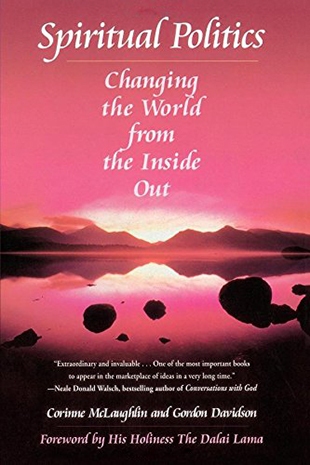