By Bill Shore
Presents conscience as a catalyst to change, an interpreter of life, a spur to morality, and a source of hope.

Bill Shore is the founder and executive director of Share Our Strength, one of the nation’s leading anti-hunger and anti-poverty organizations. Since its founding in 1984, it has raised more than $150 million and has funded more than 1000 organizations. Shore’s last book was The Cathedral Within, which laid out a blueprint for charitable actions in the twenty-first century. He presently gives over 100 speeches a year as a keynoter. As he states early in this work, his intention is to provide a map for those who want to journey into the future using conscience as their guide.

George Washington once stated: “Labor to keep alive in your breast that little spark of celestial fire called conscience.” Shore sees this little spark as a catalyst to personal and societal change, as an interpreter of life, as a spur to morality, and as a source of hope in these depressed times. Whether writing about the challenges of helping his children listen to their consciences or by examining the central role of this faculty in the achievements of Martin Luther King, Jr., Rosa Parks, Jackie Robinson, Julia Butterfly Hill, Muhammad Ali, and Illinois governor George Ryan, Shore demonstrates that silence, solitude, patience, and discernment are active ingredients in this celestial fire.

Whereas many see darkness on the horizon, Shore refuses to give in to doom and gloom. For him, conscience is “the cradle of hope.” He offers substantive quotations on this theme by Elie Wiesel, Robert Coles, and Dietrich Bonhoeffer. He believes that parents must take hold of the challenges of the present moment: “That’s why a child’s best compass is a conscience, and a parent’s most important job is to teach the child to trust that true north is where the quivering needle says it is. How many times have you been driving somewhere and lost confidence in the accuracy of your directions, so instead charted your own course? How many times did you regret doing so? Children are born with a conscience, just not with the wisdom to abide it. That’s where parenting comes in.”

Shore ends this book with a salute to some conscience-driven “moral entrepreneurs” and leaders who called upon the still small voice within during times of crisis. Using a very relevant metaphor, he concludes that “America’s new collective conscience may be our ultimate secret weapon, self-modernizing, ever-renewing, our natural and best defense.” This comes after his discussion of September 11.

Bill Shore has correctly intuited that in this period of ethical disarray the nation needs a new respect for conscience as a transforming tool to personal and societal change. His illustrative material is wide-ranging enough to speak to a mass audience. And he has nicely mixed examples of activating conscience from his experiences as a parent with those of his work advocating change in the public realm. 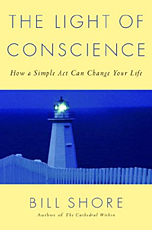