By Martin Marty
A rounded and revealing portrait of the controversial religious reformer.

In this fascinating biography, Martin Marty, the much-quoted and eclectic Lutheran historian, presents the life and work of the religious reformer who changed the face of Christianity with his 95 Theses. Marty points out that Luther was a man of extremes: "He did not favor middle-ground or gray areas but instead loved paradox and contradiction. The stormy contender was not the kind of person who could say to an opponent, 'Perhaps you have a point.' He had the courage to stare popes and emperors in the face, but even after his affirmation of faith, he often lived with dread. A man of passions given to verbal violence, he could also be tender, compassionate, and lyrical in his writings. A maker of enemies, he also attracted friends and loyalists. A man of the people. he was unawed by popes but often too awed by princes. Zealous for God, he developed a theology which honored the secular realms of life."

This life of Luther depicts him as a struggler with God who spent many of his days in fear of divine wrath, seeing himself as a terrible sinner. This, of course, made his appreciation of grace more heartfelt. In four chapters on the hunger for certainty, defining the life of faith, living the faith, and the heart grown cold, the faith more certain; Marty has much to say about Luther's view of theology, the Bible, music, marriage, and vocation. On the latter, he notes that this reformer took the idea of calling and applied it to all persons who served the purposes of God through their labors, whether "princes or peasants, people at prayer or cleansing the stables, working hard or finding amusement, procreating or grieving, peacefully serving justice or fighting in just wars."

Marty paints the man whole with acknowledgement of his dastardly response to the peasant revolt and his rampant anti-Semitism. He concludes that Luther was "a man of conservative outlook in respect to much church life, but also a person of radical expression who took extreme positions." This is a rounded and revealing portrait of the controversial religious reformer. 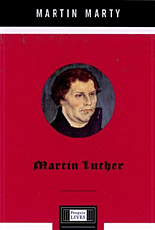