By David Callahan
A hard-hitting work of social criticism that delineates some reasons for the ethical disarray in the United States.

David Callahan has written extensively about American history, business, and public policy. He is the author of five previous books. In 1999, he cofounded Demos, a public policy center based in New York City that combines research and advocacy, working to strengthen democracy and expand economic opportunity in the United States. The Cheating Culture is a welcome and much-needed work of social criticism that takes a hard look at a troubling phenomenon. The epidemic of cheating covers all segments of society and is a sign of the moral rot at the heart of American culture. Here are some examples:

• Tax evasion by the rich is rampant and the average taxpayer has to come up with an extra $3000 a year to cover the shortfall.

• Nearly half of resumes contain lies.

• Half of all major leaguers are using steroids.

• Students are cheating, even at top-grade universities.

• Reporters have fabricated stories, and major writers have been caught plagiarizing.

• Big mutual funds are under investigation for unfair practices.

Callahan's cultural criticism shines thanks to his extensive research which includes interviews, government reports and statistics, studies by social scientists, public opinion polls, and journalistic investigations of scandals and cheating incidents. Quite a number of diverse factors have seeded this epidemic and he pins down a few of them: "Cheating thrives where unfairness reigns, along with economic anxiety. It thrives where government is a weak captive of wealthy interests and lacks the will to do justice impartially. It thrives where money and success are king and winners are fawned over whatever their daily abuses of power."

Callahan puts his finger on one of the main sources of ethical disarray in his examination of the rise of "the Winning Class." The top 1 percent of households have more wealth than the entire bottom 90 percent combined. This economic inequality has brought about startling changes in our society. The rich and the powerful have used their wealth to turn things their way in Washington, D.C. Certainly the old ideals of civic togetherness have been set aside with the increase of gated communities, exclusive restaurants, private golf clubs, and chartered jets. Much of the new cheating, according to the author, is now among those with the highest income and social status: "The Winning Class's clout inevitably has produced hubris and a sense that the rules governing what Leona Helmsley called 'the little people' do not apply to them. This hubris is only partly founded on the kind of delusions made possible by a culture that imputes moral superiority to those who achieve material success. . . . In short, the Winning Class has every reason to imagine that they live in a moral community of their own making governed by different rules. They do."

Callahan makes many valid points to shed light on this widespread ethical problem. For example, in polls people talk about their fears of being ripped off or misled or cheated by others. And the gap between the rich and the poor has created distrust on both sides. The author also assesses what experts on academic dishonesty call the "cheating effect" whereby people rationalize the need to cheat by saying that everybody does it. This slippery slope leads to widespread dishonesty justified in the name of getting ahead or becoming a winner.

Callahan calls for a new social contract in America that gives people some clear guidelines: "Anyone who plays by the rules can get ahead. Everyone has some say in how the rules get made. Everyone who breaks the rules suffers the same penalties. And all of us are in the same boat, living in the same 'moral community' and striving together to build a society that confers respect on people based on wide variety of accomplishments." He also wants government agencies to enforce these rules of fair play, more work on establishing ethical standards in the business community, more emphasis upon honor codes in schools and universities, and a return to civic-mindedness where individuals sense that we are all in the same boat and can work together to create a better and more just society.

If you read one book of social and cultural criticism this spring/summer, make it this one. 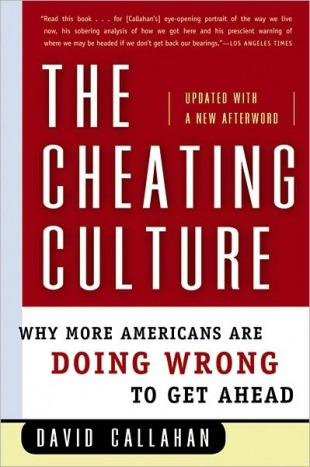