By Robert Bly
A revised edition of a classic collection with ten new poems.

Kabir lived in fifteenth-century India. Not much is known about him except that he was a weaver, married, and entranced with his mystical vision of life. In the tradition of the ecstatic poetry of Rumi, he reveals his yearning for God, his gratitude for life, and his openness to the many ways in which the Source of All is evident in all beings. Kabir is always on the lookout for signs of the divine or, as he notes in one poem, he hears the sound of "the anklets on the feet of an insect as it walks." He is critical of any outward show of religious righteousness for the sake of the ego: "Suppose you scrub your ethical skin until it shines, but inside there is no music, then what?"

This volume is a revised edition of a classic collection with 10 new versions included along with an afterword by John Stratton Hawley. As Robert Bly notes in his preface, Kabir demonstrates the importance of spiritual ardor and is definitely underwhelmed by spiritual passivity. This spiritual teacher eschews religion that is based on proof texts, gurus, or anything that you have not experienced yourself: "Kabir talks only about what he has lived through. / If you have not lived through something, it is not true."

For this Indian poet, everything is connected and the unity is exhilarating: "Everything is swinging: heaven, earth, water, fire, / and the secret one slowly growing a body. / Kabir saw that for fifteen seconds, and it made him a servant for life." It is interesting that the poet uses the term "the Guest" for the Divine since many poems salute the spiritual practice of hospitality. More than any other poet, he incarnates an openness to many paths. This comes through in the following poem:

"Are you looking for me? I am in the next seat.
My shoulder is against yours.
You will not find me in stupas, not in Indian shrine rooms, nor in synagogues, nor in cathedrals:
not in masses, nor kirtans, not in legs winding around your own neck, nor in eating nothing but vegetables.
When you really look for me,
you will see me instantly —
you will find me in the tiniest house of time.
Kabir says: Student, tell me, what is God?
He is the breath inside the breath." 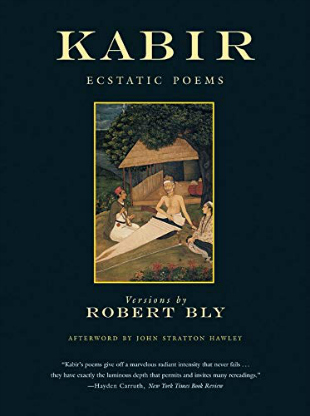