The Dark Night of Resistance

PARABLE: Long way home. The mind, traveling not as the crow flies, but in "descending gyres." Invariable method of Jesus, Isaiah, Thurber, La Fontaine. . .allow the mind breathing space to take soundings, sniff about, get bearings. All creation is grist for this mill.

Berrigan, the priest-prophet-political radical-agent provocateur, is a parable maker. The Dark Night of Resistance is a potpourri of parables written from the underground in the spring and summer of 1970. Once pursued by the FBI and history, Berrigan's voice is now muted behind prison walls. This very personal work is the best glimpse we will have into Berrigan's interior life. He tells us at the outset that he will attempt to be faithful to St. John of the Cross's method of meditation. That method is parabolic, ecstatic. Poetry becomes "the primary inevitable response to tyranny."

Berrigan takes soundings and sniffs about the meditations of Buddha and the writings of Eldridge Cleaver, Mailer, and Dickey. He seeks to get bearings on the age through poetic potshots at the lifestyle of America. His premise behind these meditations, pieces, and critiques is that political man is the natural term of man, his adulthood. It is "the high wire act of the mind that would not be in possession of, but possessed by the truth."

His political man is rebellious ("To get disconnected seems to be the first job of all, to resign from America in order to join the heart of man"), looking for trouble ("To live consciously is to sow the whirlwind"), and ethically adventuresome ("we are trying to get reborn"). Herein is a Christian ethic designed to get Americans going, growing, moving into history and making something of it. What? A peaceful world ("A man is forbidden to make capital on the death of other men") for the children of the future ("A future comes to pass because here and now, one lives as though the future were possible").

As one follows the "descending gyres" of Berrigan's political passion, it becomes increasingly clear that the man is calling for men and women bearing the name of Christ to fulfill the contagious freedom of their calling. He wants the sons and daughters of light to be as crafty and muscular as the sons and daughters of darkness. Holding the hope of all parable tellers, he wants the reader to step into the story he has spun and make a decision. His readers are challenged to become politically decisive in making a space for those who will follow: "Keep on the trail and spoor of that utopia which is man's true and real estate."

The Dark Night of Resistance succeeds in giving the mind breathing space. It is a high-powered plea for a sharpened public conscience and an astonishing prayer for peace. Berrigan's political vision will provoke you, anger you, pester you. It might even get you going, growing, moving toward his dream of utopia. No matter where you stand in the political spectrum, Berrigan's parables will provide you with a methodology, an ethical strategy for activating your inner life. Take the long way home with The Dark Night of Resistance. Berrigan's greatest contribution to Christendom may well be suggesting a way to travel rather than destination. 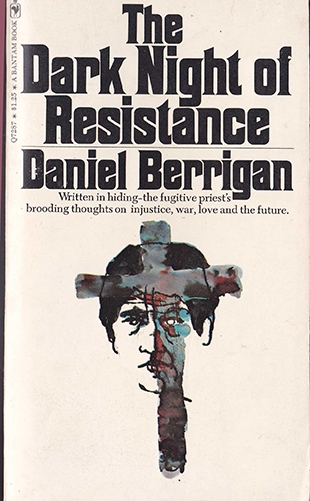