By Ram Dass
Offers many insights into the spiritual riches of Hinduism.

In 1974, Ram Dass taught a workshop, "The Yogas of the Bhagavad Gita," for a summer session at the newly established Naropa Institute (now Naropa University) in Boulder, Colorado. This book is a collection of those talks. As editor Marlene Roeder points out, Ram Dass did not offer a scholarly exegesis on the Gita, or an analysis of its text, but a series of riffs on its major topics including karma and reincarnation, Brahman, sacrifice and mantra, renunciation and purification, devotion and the guru, social aspects of sadhana, and dying. His workshop also included experiential exercises designed to bring the Gita home, including eating meditations and journal-writing assignments. For Ram Dass, this Hindu text was an instruction manual for living a spiritual life. His worries about whether he was really up to the challenge of teaching it were assuaged when Swami Muktananda told him: "You don't have to worry about teaching the Gita — that's none of your business. The Gita will teach itself; Krishna will do it in spite of you."

Hinduism is known for its ability to meet the needs of the body, mind, and heart. Dass examines all three yogas and does a masterful job explaining the practice of renunciation, which is not very popular in the West where people think they are entitled to gratify their desires as much and as soon as possible. He says we should reframe this practice and see it as a kind of enlightened self-interest: "We don't practice to get a bigger candy bar later on; we do it to see that our attachment to our desires will in itself inevitably lead to more suffering. At the point where we see that, we decide that we want to get free of the whole bag. That kind of renunciation doesn't come out of guilt or fear, out of shoulds or shouldn'ts; it comes out of wisdom."

Dass has a knack for finding good teaching stories. Here's one about Meher Baba: "He was crossing the United States by train, and when the train stopped in Santa Fe, he suddenly got up from his seat, climbed down off the train, and walked toward the center of town. At a certain corner, there was an old Indian man standing, leaning up against the side of a building. Meher Baba walked up to him and they looked into each other's eyes for a few seconds. Then Meher Baba turned around, walked back to the station, got onto the train, and left. He said, 'Well, that takes care of my work for this trip' "

That's the way things go in the spiritual life: we never know when we are going to assist another or what the ultimate effect of our presence will be. Nonetheless, we do our best in whatever we do. As Gurdjieff once put it: "If you can serve a cup of tea properly, you can do anything." These excellent teachings by Ram Dass foreshadow his ability to deal intelligently and creatively with death, karma, rituals, and everyday spirituality.

Try a Spiritual Practice on Yearning 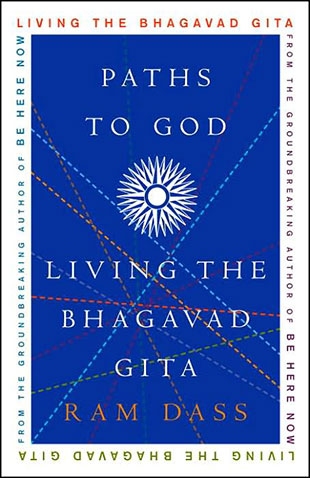