Messenger of the Heart The Book of Angelus Silesius

By Frederick Franck
Presents the mystical insights of this seventeenth-century Christian alongside the wisdom of Zen masters to illustrate the bridge between East and West.

Angelus Silesius was a seventeenth century Christian mystic who described his four days and nights of illumination in 302 epigrams that he published as "The Cherubinic Wanderer." Artist and philosopher Frederick Franck discovered this work in a Copenhagen bookstore. He was drawn to these short poems from one who lived in "a century of upheavals, wars, and revolutions, a time of religious conflict, almost as troubled as ours." He remembered reading them before but in the meantime had himself been engaged in some 25 years of Zen study. This time, reading them, "It was as if the ancient Zen Masters, who had become my companions and friends, were bending over me, whispering their own — sometimes quite ironic — commentaries in my ear."

Franck presents his translations of half of Silesius's epigrams in this delightful paperback. To show how this mystic's observations parallel Zen wisdom, he juxtaposes them to sayings of Zen teachers. The result is proof positive that Silesius is a bridge between Eastern and Western mysticism.

The material on these pages is as fresh as it was in 1976 when the paperback was first published. Franck becomes a spiritual guide leading us on a mystical adventure that opens our eyes to unity, the wonders of nature, the bounties of grace, the mystery of God, the meaning of wealth and riches, the value of silence and stillness, the greed and gluttony of the ego, and the sadness that accompanies a world split apart by dualism.

Once you accept that all things are filled with the glory of the Creator, there can be no lesser beings:

A ruby
is not lovelier
than a rock,
an angel
not more glorious
than a frog.

Silesius is a master teacher of the process of divinization, which has been underplayed and even scorned within Christian tradition. Ponder these epigrams on the subject:

No school on earth
can do more than define
that which the Spirit teaches —
to live the life divine.

If you hope to give birth
to God on earth,
remember: God is not external.
Conception takes place in the heart,
the Womb of the Eternal.

Franck emphasizes the closeness of Zen masters and this Christian mystic on the importance of the spiritual practice of equanimity:

He has not lived in vain
who learns to be unruffled
by loss, by gain,
by joy, by pain.

A man who's steadfast
in joy as in calamity
is one who has
achieved at last
God-given sanity.

This volume is another example of Frederick Franck's pioneering work in interspirituality. He has drawn the rich resources of Eastern and Western wisdom together in an uplifting and edifying whole. With Franck's line drawings illustrating the poetry, this is a beautiful edition. 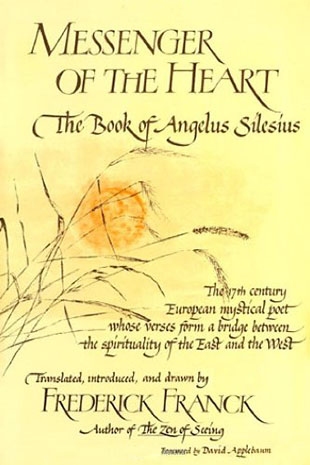