The Jewel Tree of Tibet The Enlightenment Engine of Tibetan Buddhism

By Robert Thurman
Presents some tools to practice love and compassion in our uneasy and troubled world.

In this six-cassette audio course, Robert Thurman offers nine hours of teachings on Tibetan Buddhist understandings of enlightenment, compassion, and love. He uses the revered seventeenth-century text Mentor Devotion by Panchen Rinpoche as a guide. Thurman covers a lot of territory in these twelve sessions with his usual enthusiasm and erudition.

He begins with a description of Buddhism as the great bliss state and moves on to explore the nature of the path of enlightenment. He offers six Jewel Tree guided meditations as well as spiritual practices from the deep reservoir of Tibetan Buddhism. Pay close attention to the eleven steps toward creating the spirit of enlightenment, the three essential forms of wisdom, the rounded treatment of mind reform and the habit of self-preoccupation, the eighteen facets of the Bodhisattva vow as paths to universal compassion, the Tibetan Buddhist view of biological and spiritual evolution, the four varieties of Tantra, and the four keys to the attainment of personal selflessness.

Tibetans have called Buddhism "a wish-fulfilling jewel tree." On this audio retreat, you will be exposed to the riches of this path and given some tools to practice love and compassion in an uneasy and troubled world. 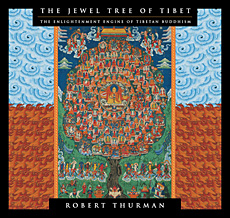