By John Shelby Spong
A clarion call for reformation addressed to progressive Christians and others.

The battlelines are drawn, and Christianity in America is in the midst of deep and divisive fights over the meaning of God, faith, sexuality, and views of other religions. According to the always outspoken and always controversial John Shelby Spong (Why Christianity Must Change or Die, A New Christianity for a New World) fundamentalist Christianity is marshalling all its forces in one last desperate attempt to crush progressive members of the community of believers. The author sees this as a moment of reformation and revelation. He envisions the birth of a new humanistic Christianity where everyone can be a God-bearer and enjoy the promise of Emmanuel. But first, we must come to grips with "the terrible texts of the Bible" that have been used down through the centuries to justify oppression, violence, hated, and discrimination against women, homosexuals, Jews, children, and the environment. With prophetic vigor, Spong lays bare the evil done by the people wielding these texts like weapons in the name of God. He also calls the Christian community to accountability for its long and sad history of violence and hatred of those it has deemed as "the other."

The text of "Be fruitful and multiply and subdue the earth" in Genesis 1:28 has been used to stamp out birth control and to justify the subjugation of the earth. Spong points out that, given the facts of overpopulation and global warming, these Christian objectives are now nothing less than "a prescription for human genocide." In this time of environmental degradation, believers should be standing alongside primal peoples all over the world who are speaking out in support of the Earth and all species. Spong urges: "Moreover, Christian ethical teaching that does not serve the purpose of enhancing human life but rather continues to trap its constituents in patterns of hopelessness, poverty and despair must be confronted with the fact that its operating principles are now nothing less than immoral." The author then spells out what he means by the phrase "good ecology requires good theology."

Many other critics have pointed out the deep and pervasive sexism of the Christian church. Indeed, much remains to be done to combat the continuing perception that women are both corrupt and corrupting. But what is proving to be most divisive is the passion, rhetoric, and hatred behind the crusade against homosexuals who are viewed by conservative Bible-quoting Christians as the scourge of the earth. They condemn what they call their unnatural and deviant behavior by quoting nine scripture passages, including those in Leviticus 18 and 20. Spong examines these Biblical texts and then concludes:

"It is also no longer a morally defensible argument for hierarchical figures to protect the destructive homophobia of some leaders and church members in order 'to preserve the unity of the church.' A church unified in prejudice cannot possibly be the Body of Christ. Can anyone imagine a church preserving its unity by tolerating slavery in its midst? Is there any difference between that situation and tolerating homophobia? Any prejudice based on who a person is, his or her very being as a child of God, cannot be a part of the church's life. Quoting Leviticus to justify our prejudices is no longer an option."

In other chapters, Spong probes the Bible's statements about children. He condemns corporeal punishment within the home or school and sees a link between this activity and a view of God as a vindictive judge who enjoys disciplining human beings for their misdeeds. He excoriates Christianity for birthing anti-Semitism and takes a hard look at the Gospels and the figure of Judas. He then moves on to an assessment of the Bible and certainty. He examines the long history of Christian arrogance towards other religions, whose adherents have not been seen as great treasures for spiritual wisdom but as potential converts. The author envisions a multifaith approach of respect:

"No one holds a corner on the market of salvation. There is no one way into God that all must follow if they hope to arrive. There is, however, an Ultimate Reality beyond all human religious traditions. We call that Reality God, and into that Reality all religious systems must journey. We follow our own path with integrity. We spit on no alternative path that might shake our confidence. We join hands in our common humanity and rejoice in the journey that each of us has taken. A new day dawns and it maybe begins to look vaguely like the Realm of God."

We hope that progressive Christians can become more vigorous in their public presence and serve as scouts in what Spong has called "this moment of reformation and revelation." As the hymn goes, new occasions teach new duties, and time has made ancient truths uncouth. 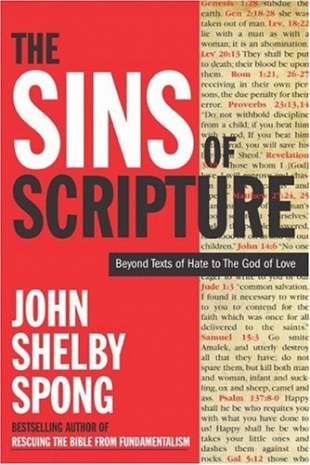