By Huston Smith, Phil Cousineau
A useful overview of the challenges faced by those practicing Native American spirituality.

At the World Parliament of Religions in Cape Town, South Africa, in 1999, a delegation of eight American Indian leaders presented a series of panel discussions under the title "America's Shadow Struggle," in which they spoke about their 500-year struggle for religious freedom. Huston Smith (Why Religion Matters), the historian of world religions, was on hand to ask questions and to make it clear that governments and other institutions need to listen: "Tribal peoples have religions which are fully deserving of the world's attention." Although many Americans take great pride in our country's freedom of expression, it is a fact of history that Native Americans have been denied political and religious freedom again and again.

Phil Cousineau (The Olympic Odyssey) filmed nine interviews with Native Americans at Cape Town and added two others with Vine Deloria Jr. and Oren Lyons. In his preface, he salutes the vitality of the Good Red Road which binds Native Americans "to the land, to the whole, to the Creator, to the sacred truth behind the illusion of separateness that marks the institutionalized religions of the world." Luther Standing Bear described this complex web as the "Big Holy."

In his interview, the late leading Native American scholar Vine Deloria, Jr. (Lakota) talks about the "spiritual malaise" of America and the ways in which that relates to the Indian struggle for religious freedom. Walter Echo-Hawk (Pawnee) sees this as not only a theological issue but a "basic human rights issue." In his conversation with Winona LaDuke (Anishinaabe), Smith states: "In my mind, this mutual relatedness is the single greatest contribution of the primal peoples to the world." She shows how Native Americans have always tried to practice an ecologically sound spirituality.

Charlotte Black Elk (Lakota) discusses the continuing problem of enduring threats to Native American sacred sites. Douglas George-Kanentiio (Mowhawk) examines the distressing crisis that many native languages are vanishing. Frank Dayish Jr. (Navajo) takes a hard look at the battles fought by those who want to obtain legal protections for the ancient practice of peyote. Lenny Foster (Dine) covers the fight for Native American prisoners' rights. Tony Gonnella Frichner (Onondaga) weighs in with her views on the threat of the human genome diversity project. Anthony Guy Lopez (Lakota) explores the issues behind one of the most hotly disputed sacred land fights in the United States. The last interview is with Oren Lyons (Onondaga) on his vision of a land-based spirituality. 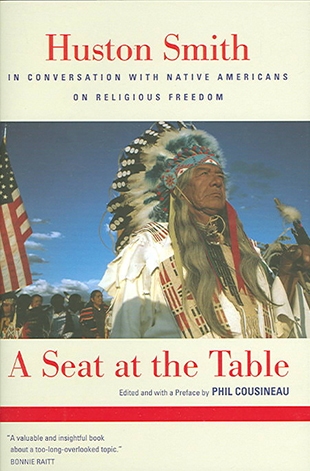