Your Daily Life Is Your Temple

By Anne Rowthorn
A fine examination of the importance of openness and hospitality to the forging of an everyday spirituality.

Anne Rowthorn is a freelance writer who has traveled widely writing on many subjects, from children living on the streets in Bucharest to victims of war in El Salvador. She wrote this book while she was a Visiting Fellow at the Episcopal Seminary of the Southwest.

Rowthorn begins with a quotation by Carlo Caretto from his Letters in the Desert: "By spirituality, we mean the way of thinking, living, and sanctifying the acts of our lives." Not a bad definition of the quest that occupies so many churched and unchurched people alike. Seekers are looking for the presence of God all around them: "A spirituality of everyday life is everything we do, all day long, that builds up the commonwealth of God. Your daily life is your temple. Together let us open its doors and uncover an authentic spirituality that recognizes all of life as holy. It is already there, just waiting for us to behold and to grasp." Rowthorn offers a substantive commentary on the importance of openness and hospitality in forging this everyday spirituality. Having traveled and taught in many countries, she has an appealing multicultural perspective.

In Japan, while attending the Golden Week Festival, the author discovers a Buddhist prayer that takes her to the core of her Christian faith. Walking down the backside of Kurama Mountain, she realizes a door had been opened:

"I was filled with an insatiable desire to discover the wealth of wisdom embedded in other great religions of the world. In following this path I intuitively knew that my Christian faith would continue to deepen, and I sensed that I would arrive at a more global sense of the wonder, the beauty, the majesty, and the justice of God — the God of a thousand names and faces. Passing through the temple gate to Mount Kurama opened my eyes to seek and value wisdom and to nurture it from wherever it comes. By a random hike I found myself traveling down a bright new path of enlightenment that had been trod by many before me. I understood in my inner being that I could have it all — that there was no need to reject any religion, philosophy, or source of enlightenment that nourishes the soul."

While some would disdainfully characterize this as a supermarket approach to religion, Rowthorn sees it as an authentic response to the wisdom that is available in many different paths, philosophies, and perspectives. In other chapters, she explores home, work, children, art, the earth, hospitality, money, justice, and forgiveness as portals to everyday spirituality that nourishes mind, body and soul. 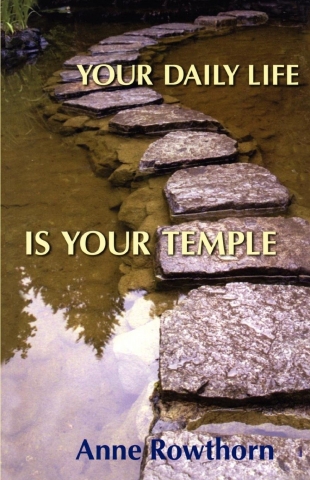