By Mary C. Earle
An inspiring and uplifting spiritual classic that enables those suffering with chronic or progressive illnesses to reframe their situation and see it as providing the groundwork for a new rule of life.

In 1995, spiritual director, retreat leader, writer, and Episcopal priest Mary C. Earle was hospitalized with acute pancreatitis. The condition was so serious that it changed everything: her energy was depleted, her appetite was confined to the simplest of diets, and her digestive process was greatly diminished. Earle laments: "It seemed that a life with boundless horizons had been reduced to a life of one limitation after another." Her loved ones were affected as well. But thanks to her spiritual perspective and experience with the Rule of Benedict, dating from the sixth century, she was able to see her illness as providing the groundwork for a new rule of life!

The author quotes a saying by Masahide from the Japanese Zen tradition: "Now that my house has burned down, I own a better view of the moon." Although our bodies might be diminished by limitations and vulnerabilities, a chronic or progressive illness gives us a chance to live more consciously and be more open to the Divine. We can listen to our bodies and to the different contexts and rhythms of the day set by our illness. In this bold and dramatic spiritual work, Earle points out ways to feel sustained by God in the midst of our daily routines.

One of the most healing and helpful suggestions is turning the regular taking of medication into times of prayer similar to the Offices of the Day. We can use an intercessory petition as we feel ourselves stay connected to the many others with the same disease. We can also be grateful to all those who are responsible for bringing us the medication: pharmacist, physician, researcher, and chemist.

Instead of recoiling at the increased emphasis on rest, Earle takes a cue from the great Rabbi Abraham Joshua Heschel:

" 'Unless one learns how to relish the taste of Sabbath while still in this world, unless one is initiated in the appreciation of eternal life, one will be unable to enjoy the taste of eternity in the world to come,' writes Heschel. Here is a strange possibility: the imposed rest of illness may be the means by which we begin to savor the taste of eternity in this life. Imposed rest, which at first might feel restrictive and difficult, may be the beginning of perceiving life anew."

Earle has other suggestions about nutrition and mindful eating, exercise, and pondering your own death. Chapters relate the Benedictine vows of stability, obedience, conversion and prayer to a life of treatments, exams, and hospitalization. Beginning Again: Benedictine Wisdom for Living With Illness by Mary C. Earle is an Explorefaith.com book that is a must-have resource in the home of all those living with chronic or progressive illnesses. 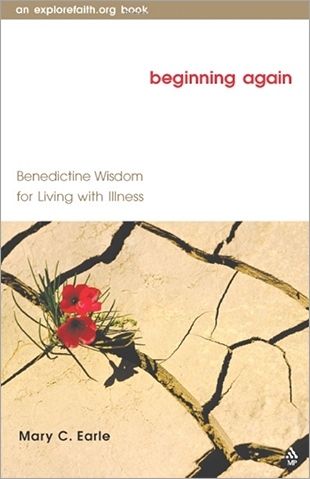