By Bradford Keeney
Makes a solid and convincing case for the revival of shaking medicine as a catalyst to wildness, ecstasy, devotion and joy.

Bradford Keeney is an internationally known scholar, therapist, and shaman who has led expeditions throughout the world to study cultural healing practices. He is the author of many books including Shamanic Christianity: The Direct Experience of Mystical Communion, one of our choices for the Best Spiritual Books of 2006.

Keeney felt the lightning bolt of God's divine shaking love many years ago and has explored this healing path around the world. The ecstatic movement of the human body is one of the most ancient techniques used by shamans and others to bring about therapeutic benefits to members of the community. In this bold and adventuresome paperback, Keeney makes a solid and convincing case for the revival of this healing modality. His creative stories and willingness to explore all dimensions of wildness make him a first-rate guide; it also helps that he has experience and access to practitioners from many different traditions.

One of the reasons why shaking has not been taken seriously in the more literate and technologically developed cultures is that it has been seen as "signs of mental distress, neurological disorder, psychopathology, psychological dissociation, or possession by spirits." This kind of misunderstanding and wrong-headedness has been directed at the more ecstatic religions of Africa where wild dancing, jumping up and down, or body shaking are the norm. Another misperception that must be put to rest is that ecstatic movement signals that a person is "out of control," so we immediately characterize that person as sick, bad or mad. Keeney points out that in the West we have embraced the meditation techniques of Asia as being salutary. But the time has come for us to admit that a new paradigm for medicine is needed that honors "both arousal and relaxation as necessary co-components for the fullest realization of the healing response."

For Keeney, shaking is the skeleton key that opens the doors of the wild — and that's a good thing. He writes about the Kalahari Bushmen, Japanese shaking medicine, and Indian shakers who all use "the arousal response" to open to an experiential place where vision and imagination can frolic together. One of the most interesting chapters is on the Quakers (George Fox's followers) and the Shakers (led by Ann Lee) who were persecuted and often imprisoned for their adherence to the practice of ecstatic movement.

Keeney has a special place in his heart for the spirited services of many African-American churches where shaking is regularly practiced. He points out that in some congregations the arrival of the Holy Spirit is signaled by a hissing sound that moves from one person to another. This kind of thing was regarded as the "rushing wind" associated with the Holy Spirit who came at Pentecost. Keeney notes that shaking medicine is different from the whirling dervishes of Sufism or the modern day ecstatic dancing of Gabrielle Roth.

The author celebrates many ways in which shaking is therapeutic for those who try it. Here is what he sugggests:

"1. Focus on good feelings, preferably love, compassion, and kindness, and stay connected to them. It doesn't matter what words or phrases, if any, come to mind.
2. Turn on some spirited rhythmic music and start wiggling and moving.
3. It doesn't matter whether your eyes are open, half-closed, or closed. Allow them to be in whatever position feels natural.
4. Activate your muscles, wiggling and moving them from head to toe.
5. Gradually increase the rate of breath until you are breathing rapidly.
6. Assume an active attitude toward becoming excitable; encourage yourself to tremble, shake, and quake.
7. Continue for as long as you wish.
8. At the end of the exercise, let your body do what it wants — lie down, sit, walk, or whatever feels right.
9. Do this when you desire, even once a day, but at least once a week."

The path of shaking as a healing modality enables us to deal with change, to express love, to explore wildness, to probe our interior wisdom, to let go of attachments, to incarnate deep prayer, and to set our minds, bodies, and souls free. Keeney lets loose his super-charged imagination and concludes with this image of what he calls "Life Force Theatre":

"The way to change the world, the most important revolution that will change hearts and souls, takes place when people start dancing in the streets and call for the lifting of our spirit. If you want to change things, start humming, singing, and whistling. Music in the air will bring down the seriousness that maintains the tyrant's climate of totalitarianism. Laugh to melt away the edge of fear. Sing and the moral enforcers are silenced. The greatest fear of despots and dictators is joy. Bring in the clowns, merry tricksters, and sacred fools, and watch the politicians get laughed out of office."

By the end of this paperback, you may find yourself joining with the author and asking the Divine to "take me, make me, shake me." 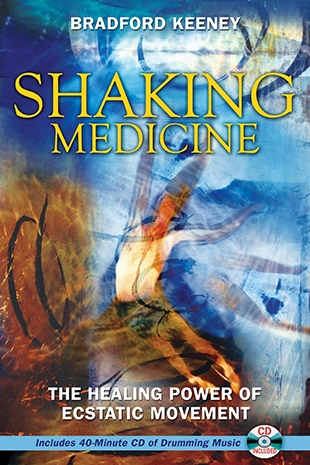