By David C. Korten
Encourages us to move beyond Wall Street to a new economic paradigm based on Main Street and real wealth.

David Korten is president and founder of the People-Centered Development Forum, chair of the board of YES! Magazine, and a board member of the Business Alliance for Local Living Economies. He is the author of The Great Turning: From Empire to Earth Community. In that prophetic work, he outlines the necessity of moving from a domination country to one based on partnership and cooperation.

In Agenda for a New Economy, Korten boldly takes on establishment supporters of the status quo in a hard-hitting and up-to-date assessment of the economic meltdown and the idea of spending trillions of dollars to fix Wall Street. He contends that the major failures of our economic system are based on the fallacious idea that money is wealth and Wall Street has mastered the art of creating "wealth" without producing anything of real value. This is phantom wealth, and it's produced a catastrophic mess. A far better approach would be to build a new real-wealth economy based on Main Street "where people engage in the production and exchange of real goods and services to meet the real needs of their children, families, and communities, and where they have a natural interest in maintaining the health and vitality of their natural environment." But moving beyond the economic mirage of Wall Street will require a massive bottom-to-top redesign of our economic assumptions, values, and institutions.

Korten believes that in the face of staggering unemployment, consumer debt, housing foreclosures, a shrinking middle-class, and an increasing gap between the rich and the poor, we need to address the deeper structural causes of our three-fold financial, social, and environmental crisis. The alternative to the rapacious excesses and corruption of capitalism is "an economic system that roots power in people and communities of place and that unleashes our innate human capacities for cooperation and creativity." The present-day crisis offers America a chance for a breakthrough in the midst of a gigantic breakdown.

In a daring and spiritually rich section titled "Agenda For A Real-Wealth Economy," Korten posits that the human brain is wired to support caring and sharing and then shows how this new economic model offers a reallocation of resources that will bolster community, increase equity, be ecologically sound, and spur human health and happiness. He sets forth a 12-point agenda "for liberating Main Street and banishing Wall Street to the dustbin of history." After delineating a strategy for creating a new financial services sector responsive to Main Street, he presents a fictional account of a future where the real-wealth economy is functioning. Korten presents steps we can take and things we can do to make this paradigm shift happen. He concludes:

"Our defining gift as humans is our power to choose, including our power to choose our collective future. It is a gift that comes with a corresponding moral responsibility to use that power in ways that work to the benefit of all people and the whole of life. It is within our means to replace cultures and institutions that celebrate and reward the pathologies of our lower human nature with cultures and institutions that celebrate and reward the capacities of our higher nature. We can turn as a species from perfecting our capacity for exclusionary competition to perfecting our capacity for inclusionary cooperation." 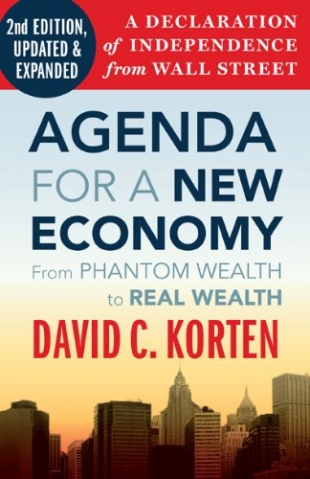