By Mary Oliver
More down-to-earth lyricism from Mary Oliver in a new collection of 47 poems.

Mary Oliver, winner of the National Book Award and the Pulitzer Prize for poetry, was recently awarded an honorary doctorate of humane letters from Tufts University. Evidence is her 19th book of poetry and it proves how important wonder is as a faculty; it revels in the amplitude of earthly delights in our rich world of this and that. In Oliver's poetry this quality begins in the senses, comes alive in the imagination, and flourishes in adoration of the Divine. It makes us avid explorers of the natural world and celebrants of all living beings. As Oliver demonstrates in this collection of 47 new poems, there is no end to what can awaken our wonder.

The poet begins with "Yellow" where she writes:

There is the heaven we enter
through institutional grace
and there are the yellow finches bathing and singing
in the lowly puddle.

Oliver ends with "Another Summer Begins" where she ponders how many more she has left; she grows older but the natural world seems forever young. She decides to stop with the questions and the musings and just spend the night sleeping in the pasture. In between these two poems are many others that plunge us into the dramas of flowers, birds, rivers, stones, trees, and more. All are cherished with her inimitable down-to-earth lyricism.

Oliver acknowledges in "Swans" the beauty of these creatures but refuses to imprison them in her thoughts and then, on cue, they vanish. In "Halleluiah," the poet notes how wondrous the world is and acknowledges that she has not always loved everything. But now that she is over 60, there are "some days I feel I have wings." In "Water," Oliver notes the importance of this resource to an ill man and the forest.

In "With Thanks to the Field Sparrow, Whose Voice Is So Delicate and Humble," the poet admits she's not comfortable with the cleverness of our times — all the talk of computers, bombs, and blood. Touching four warm sparrow eggs in a nest is "more wonderful than all the electricity of New York City." Oliver thrills to a single note of hope rising in the music of "Schubert." In "At the River Clarion," the poet reflects on God and at one point wonders:

Yes, it could be that I am a tiny piece of God, and
each of you too, or at least
of his intention and his hope.
Which is a delight beyond measure.

A poem called "Wolf" is especially meaningful to us given the recent decision by the U.S. Secretary of the Interior to remove those animals from endangered species protection in the West; they are now the targets of hunters. Talk about a world we have broken and tarnished with a lack of love for wild animals! Perhaps some day, more citizens will share Oliver's hope expressed in "I Want":

I want to be
in partnership
with the universe.

And in "The Singular and Cheerful Life," she savors some flowers and then concludes that her amazement keeps growing and flowing for the marvels in this world. Her question is one for us all:

What, in the earth world,
is there not to be amazed by
and to be steadied by
and to cherish? 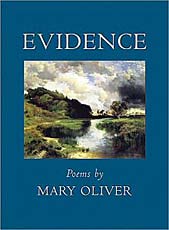