By Michael Plekon
Calls for a reframing of saints from seeing them as celebrities to knowing them as ordinary people being holy in a variety of new and interesting ways.

Michael Plekon is a professor in the department of sociology, anthropology, and the Program in Religion and Culture at Baruch College, City University of New York. In his book Living Icons, he wrote about holiness in the lives and writings of noteworthy individuals in the Eastern Orthodox tradition in the modern era. Now he turns his attention to holiness in the lives of saints. Plekon would like to move beyond what he calls the cult of celebrity saints who have been seen as paragons of virtue and purity, miracle-workers, and pious souls. The lives of the saints covered in this book witness to "the universality, diversity, and ordinary qualities of sanctity in our time."

The process of beatification and canonization has consistently gone in favor of clergy and religious while excluding, for the most part, married men and women, parents, teachers, other professionals, and social activists. Plekon salutes the humanity and spirituality of Etty Hillesum, Thomas Merton, Dorothy Day, Oscar Romero, Simone Weil, and others like them who do not fit the pattern of celebrity sainthood with their flaws, singularity, and "holy audacity." The author includes portraits of saints of hidden holiness he has met including lay theologian Elisabeth Behr-Sigel, nun and iconographer Joanna Reitlinger, Alaskan Olga Michael, and YMCA staffer Paul Anderson.

Plekon reframes holiness seeing it both as the gift of God and the product of our invention via the lives we fashion out of personality, work, and experiences. Elizabeth Johnson's Friends of God and Robert Ellsberg's All Saints are in sync with this approach. So is the creator of the fresco of dancing saints in St. Gregory of Nyssa Episcopal Church in San Francisco which includes Miriam the sister of Moses, theologian Origen, Malcolm X, Elisabeth I of England ,and Iqbal Masih, a Pakistanti martyr.

Plekton includes a quotation from Thomas Merton in the last chapter that provides a nice summary of the challenge of holiness for all of us:

"It is true to say that for me sanctity consists in being myself and for you sanctity consists of being yourself and that, in the last analysis, your sanctity will never be mine and mine will never be yours, except in the communism of charity and grace. For me to be a saint means to be myself. Therefore the problem of sanctity and salvation is in fact the problem of finding out who I am and of discovering my true self." 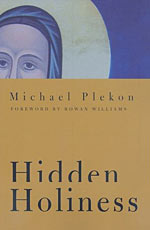