By Deborah Lakritz
The story of a shy little Jewish girl's transformation after making friends at Shalom House, a place for older people.

Lily is a shy little girl who decides to accompany her mother who does volunteer work at Shalom House, a place for older people who need help. Their neighbor, Mrs. Rosenbaum who had an art studio in her house, now has an apartment at Shalom House. Lily remembers her well — especially a painting of a vase with orange lilies in it.

When seniors crowd around Lily and her mother in the lobby of Shalom House, Lily feels her heart beat faster and her face turns red. But she manages to bear up under the strain of so many compliments and comments about her shiny shoes. The next week, Lily joins her mother at Shalom House where an exercise class is in session. And yet another week, she is pleased to join the festivities for residents with May birthdays. When Lily returns home, she plans her own surprise celebration for the residents of Shalom House. Thanks to her kindness, she is rewarded with a gift from Mrs. Rosenbaum which makes her heart turn over in a somersault!

Say Hello, Lily is written by Deborah Lakritz who has a master's degree in social work from the University of Minnesota. She has worked professionally with both pre-schoolers and senior citizens. Perhaps that's why she has been able to create such a wonderful story of cross-generational caring and sharing. The residents of Shalom House are enriched by Lily's sweetness and charm and she, in turn, is emboldened to come out of her shell and become a more socially relaxed person. Martha Avilés is the illustrator and she confesses in her bio that she "admires and honors the souls of the old." That's the spirit that offers an alternative to the obsession of our youth-worshipping culture. Say Hello, Lily is aimed for children ages four through eight. 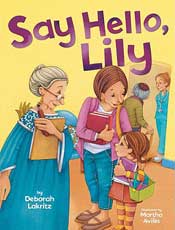