I'm God; You're Not Observations on Organized Religion & Other Disguises of the Ego

Lawrence Kushner is an author, lecturer, and spiritual leader who is recognized as one of the most creative religious thinkers in America. A commentator on National Public Radio's "All Things Considered," he is known for his wit and wisdom. Kushner is currently the Emanu-El scholar at Congregation Emanu-El in San Francisco, and an adjunct faculty member at Hebrew Union College—Jewish Institute of Religion. This formidable spiritual seer is profiled as a Living Spiritual Teacher at Spirituality & Practice.

I'm God; You're Not draws together 50 short essays, stories, and teachings from Kushner's writings and experiences as a rabbi and spiritual leader. In the introduction, he states:

"The goal of all spiritual life is to get your ego out of the way — outwit the sucker; dissolve it; shoot it; kill it. Silence the incessant planning, organizing, running, manipulating, possessing, and processing that are the ineluctable redoubts of the ego. . . . I now suspect that the real reason for religion is to help you keep your ego under control."

Kushner shares some of his spiritual adventures over the years including his decision to be a rabbi in the ninth grade; the death of his beloved teacher in 2009; a list of 28 heretical and humorous truths about surviving and healing congregational life; his salty observations about wedding rehearsals and the "puerile" nature of family services; the goal of seeing a spiritually mature community as one that "helps its members learn how to give and receive love;" the important place of "I don't know" in a rabbi's toolkit; the sign that five coughs from the audience means that the troops are restless; the challenges of intermarriage; the case for kosher; his wariness of Jesus; and a commentary on the Kabbalah. 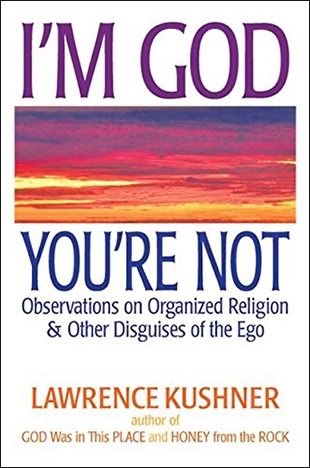