Yoko, a Japanese-American kitty, receives a package from the old country from her grandparents. It is a little antique doll in a kimono that once belonged to her mother; a note with the present says her name is Miki. On Girl’s Day — March 3 when in Japan there is a Doll Festival — Yoko wants to take Miki to school for show-and-tell. Even though her mother tells her no, Yoko takes the doll on the school bus anyway. There she is eager to present her new friend to others but instead Miki is tossed from kid to kid in a game of keep-away. Yoko is horrified when the little doll lands in a puddle on the floor, her dress ruined and her arms and legs broken.

Expecting the worst, Yoko confesses what has happened to her mother. "You made a bad mistake, my little lotus flower, but I love you just as much as ever!" says her mom. Together, they make it possible to mend Miki and get her ready for a visit from Kitty’s grandparents.

Rosemary Wells is an award-winning author and illustrator of children’s books and included among them are several other stories about Yoko. Visit her website www.rosemarywells.com. This sprightly story for kids aged four through eight contains many charming pictures of Japanese clothes and artifacts, making it a cross-cultural gem. The touching story also alludes to the ease with which mothers can forgive and help us find a way to make amends. 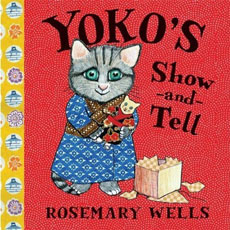